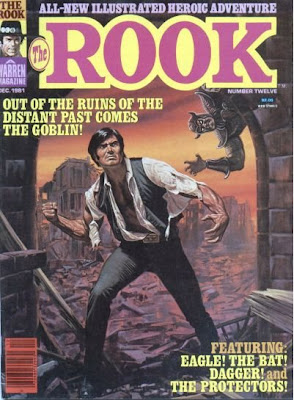 The Rook is a time-traveler whose adventures were chronicled in various issues of Eerie magazine published by Warren Publishing in the 1970’s. The character was created by writer Bill DuBay. The Rook eventually proved popular enough to receive his own Rook Magazine which ran for 14 issues between 1979 and 1982 (after its cancellation; he returned to Eerie in #132).
The Rook is actually Restin Dane, from a family of scientists whose members include the unnamed protagonist of the classic science fiction novel The Time Machine by H.G. Wells. Dane got his nickname from the fact that his time machine resembled a giant chess rook. Dane wears Western style clothing and a gun belt. His first adventure was to travel back in time to the Alamo to save his great-great-grandfather Bishop Dane, who then accompanies him on many of his adventures, along with two robots that he built.
In a later adventure, he meets the Time Traveler (who is revealed to be his grandfather Adam Dane) from Wells' book, and helps him in a war between the Eloi and the Morlocks.
Posted by Chuck Wells at 5:30 PM

NOW your talking Chuck! One of my favorite series. (I'm a Warren fanatic though, just ask Uncle Creepy!) I'm only missing 5 issues of having a complete run.

Wayne, is that a complete run of Warren magazines or just The Rook?

Is it's the whole enchilada, then consider me penis-envied over your stash. Quite an achievement, cause these mags are going for big bucks on eBay and the CGC-minded crowd aren't helping collectors (who actually prefer to read their comics) enjoy them by slabbing these babies away.

There really isn't anything like the old Warren stuff on the stands these days, and probably will not ever be again.

I found a single, early issue of Eerie in excellent condition (for cheap), for my brother to purchase at a recent one day weekend show. I even scored a nice early copy of Vampirella off of eBay a couple of weeks ago, but as I've been checking back in since then, I've come to realize that the speculators are "heavily" grabbing up these magazines for the CGC treatment .... and that just sucks.

That was just the Rook. I do have a considerable run of Creepy and a handful of later EErie's. Used to have a nice run of Vampi but traded those (I now regret it!) some years back.

I despise the whole CGC thing. I was recently pretty shocked at the "slabbed" prices I saw on issues of Deadly Hands of Kung Fu. Then again my head is still stuck in early to mid 80's prices on things. hehe

Sorry I'm coming into this late, but I'm a huge fan of The Rook!

Check out my "Rook Chronology" at http://www.pjfarmer.com/woldnewton/Rook.htm