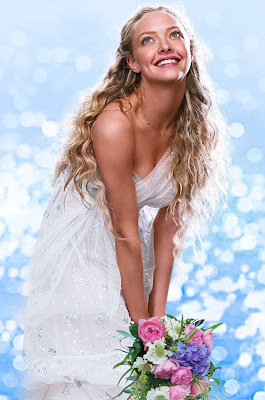 Today's "Gal" Friday pick comes to us courtesy of the movie musical, Mama Mia!
22 year old actress Amanda Seyfried has previously appeared in a couple of soap operas (As The World Turns, All My Children) , the Lindsay Lohan film "Mean Girls" and various guest star turns on television, including flashback appearances as the murdered best friend of Kristen Bell (a previous "Gal" Friday) on Veronica Mars, but she turns in a standout performance as Sophie in the movie version of Mama Mia, based on the 1970's pop music stylings of Swedish group, ABBA.
The film is light, fun, peppy and Seyfried really holds her own alongside Pierce Brosnan, Colin Firth, Julie Walters, Christine Baranski and perpetual Oscar nominee, Meryl Streep, and like her better known co-stars, she also does her own singing.
Posted by Chuck Wells at 7:51 AM