"The Pigeons of Flame" (cont.) 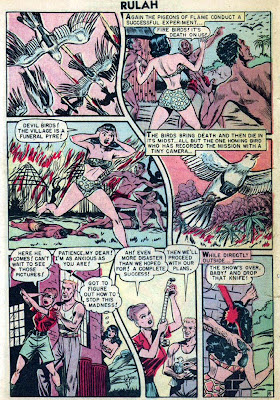 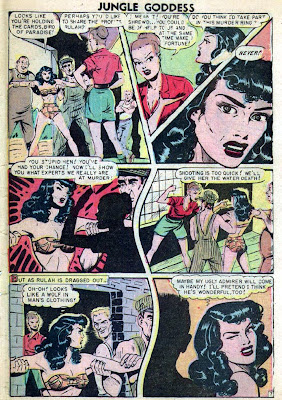 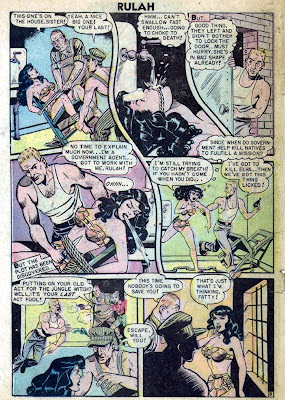 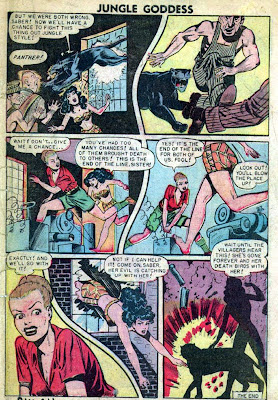 Rulah, Jungle Goddess was created by the legendary artist Matt Baker for golden age publisher, Fox Comics. She originally appeared in issues of Zoot Comics, before the title began appearing under her own name with issue number 17; this series lasted until #27, before continuing on as a simple romance comic. Rulah's given name was originally Jane Dodge, but during her self-titled series run, this was forgotten about and she became Joan Grayson. As a Sheena knock-off, Rulah 's airplane had crashed into the jungle, where she skinned an unfortunate giraffe who had wandered under the doomed plane; luckily for Jane/Joan - whose clothes had been ruined in the accident. Still, the character had a respectable run, garnering four separate mentions in Dr. Fredric Wertham's infamous "Seduction of the Innocent" anti-comics book which helped defame the era of golden age comics of which Rulah was a fun participant.
This story is from Rulah Jungle Goddess #18 (Sept. 1948).
Posted by Chuck Wells at 8:18 AM

Nice sexy jungle adventure Chuck. I don't really collect jungle comics but reading one like this makes me seriously rethink the possibilities.

Hands up, who wants this made into a movie starring Manuela Arcuri? Ooops, more than my hands went up...