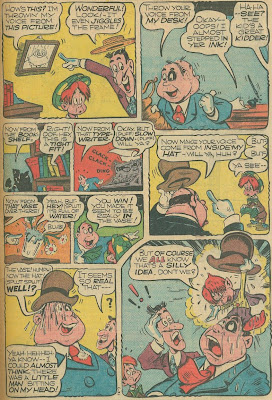 With a nod to Kid Terror's "Nedor-A-Day" blog, this tale is a personal favorite of mine.
"Sooky's Other Self" appeared in Startling Comics #47 (Sept. 1947) from golden age publisher Nedor Comics. Written and illustrated by "Don Arr" the alias of Donald Ragnvald Christensen, an animator and cartoonist, who had left the Walt Disney Studio after the 1941 Snow White production strike. Christensen worked briefly at Warner Bros. Studio as a storyboard artist for Bob Clampett's animation unit, but he primarily worked independently for nearly four decades as a storyboard writer and artist for Western Publishing, Dell and Gold Key comic books, as well as Hanna Barbera, Walter Lantz, DePatie-Freleng Enterprises, and others. He wrote and provided illustrations for such titles as Magnus, Robot Fighter, Donald Duck, and Uncle Scrooge. He also acted as Art Director during the 1960s for several Saturday morning cartoon programs, including the Marvel Comics Super Heroes revival and Star Trek: The Animated Series. Christensen was also a past President of the Comic Art Professional Society (CAPS). He died of natural causes at the age of 90, in Las Vegas, Nevada on October 18, 2006.
Posted by Chuck Wells at 7:30 AM