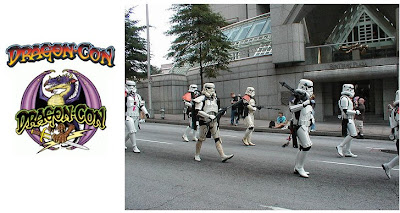 I have a few words to share with you about my Dragoncon visit this weekend; the first time that I've attended the Atlanta, GA-based show this century (I haven't been back since about 1998 or 1999;but I had made several visits between 1991 and then).
Dragoncon is in its 22nd year, and they have definitely worked the kinks out of processing thousands of fans through registration. This frequently irritating process flowed smoothly, quickly, and effectively on the morning of probably their busiest day - Saturday - and the only day that I was in attendance. My small party (four of us) got there pretty early and joined a line that was already said to be around 300+ people long for the 8:00 a.m. opening of registration; although I believe that total was a bit of an exaggeration. Once the line began to move at 7:30am - brother, it moved - so I give the show organizers very high marks for how they got folks inside the show.
The venue was spread across four major downtown Atlanta facilities, the Marriott Marquis hosted the Comics Artists Alley and dealer rooms, the Atlanta Hilton hosted the "Walk of Fame" celebrity guests and dealer rooms, the Hyatt Regency hosted much of the programming tracks and film festivals, and the Sheraton hosted the Star Trek and British media tracks .... and more.
I simply have to mention the godawful amount of humanity that was present on Saturday, lots and lots of people were there, but I didn't detect any major problems occurring due to the sheer amount of fans that were present and the Dragoncon staff seemed to have matters well in hand. I don't doubt that they were all overworked and stressed during the run of the four-day weekend, but the shows organizers and volunteers deserve a well-earned round of applause for their efforts.
Today I'm going to rest my tired feet a bit and then tomorrow I will give my impressions of the celebrity guests who appeared at the show.
Posted by Chuck Wells at 10:12 AM