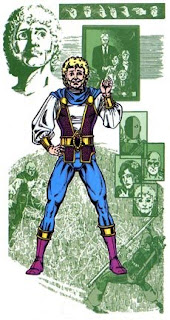 Let's return to our remembering the cast of the 1980's New Teen Titans series by Wolfman & Perez, but patience grasshoppers, more golden age comics scans will be forthcoming. Jericho first appeared during the classic "The Judas Contract" storyline in Tales of the Teen Titans #42 (May 1984).
Joseph Wilson was the youngest son of Slade Wilson (a.k.a. Deathstroke the Terminator). As a child, he was held hostage by the Jackal, a terrorist who used Joseph in an attempt to blackmail his father. However, Deathstroke refused to provide the Jackal with the information that he wanted because it went against his professional code of ethics. Deathstroke managed to rescue his son, but not before one of Jackal's men started to cut his throat. As a result, Joseph was rendered mute.
As a result of that incident, Joseph's mother Adeline divorced Slade (after attempting to kill him, but she only succeeded in blinding him in one of his eyes), and took her two sons (Joseph and his older brother Grant) with her. At some point, Joseph learned to communicate through sign language in order to compensate for his lost voice.
His ability to take mental control of the motor responses of another human body, after making direct eye contact with them is a result of the biological experimentation done on his father years before, and this power originally appeared during his late teens when he tried to save his mother from an assassin. He has the power to take possession of any humanoid being he can make eye contact with. Once inside, Jericho takes possession of his target's voluntary motor functions for his own use but is unable to control the voice and mind of the target. In addition, if the host is unconscious while Jericho is in control, he can speak through the host's body--but only with that person's accent and vocabulary--and easily control the body physically. Jericho's body changes into an astral form a few seconds before possession. He sometimes uses the American Sign Language symbol for the letter "J" as a subtle signal to his allies that he has taken possession of a person.
Posted by Chuck Wells at 7:18 AM