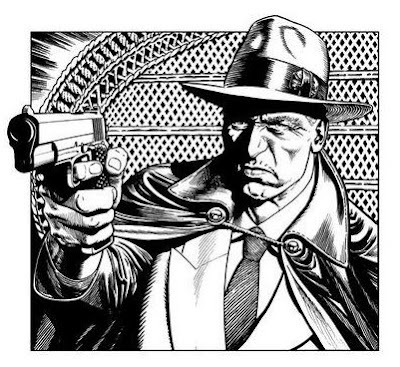 If nothing else, The Twelve #7 continues to slowly unravel the mystery of which one of these revived golden age heroes is/or may be responsible for the murder of the Blue Blade. About half of the cast appear in this issue, with a particularly highlighted role for the Phantom Reporter (the series narrator) who has now resumed his costumed identity and is in pursuit of the party responsible for a string of grisly murders.

There is a really effective moment when he confronts whom he believes might be the most likely candidate (the outcome of which won't be seen until a later issue), but appearances can be deceiving and there are a couple of other clues in this issue that may cast some doubt upon this hero as the year-long mini-series winds down.

Captain Wonder also figures prominently this time out, as he is visited by his former sidekick, who has aged in real time while the Captain was in suspended animation, and who demands a restoration of his faded powers. The response that Tim receives from the Captain isn’t to his liking, and after the two former partners sadly bitter exchange, Captain Wonder is left with yet another added emotional wound.

Overall I felt like this issue moved the plot further along than the previous two had, but the pace remains morbidly slow and hopefully things will begin heating up as the final act approaches.

Note: You may not know this, but Joe Straczynski has already moved on to DC Comics despite several more issues of "The Twelve" that are in the can and he is preparing to tackle a reintroduction of the golden age MLJ heroes in his new writing gig on "The Brave and The Bold". I guess Marvel whetted his appetite for such fare.
Posted by Chuck Wells at 8:37 AM

Chris Weston's stuff is great - just look at the effort he's gone to in that one panel you've chosen - pattern and detail popping from every millimetre!!

I'm loving this series, and loved this issue in particular. Thanks for reviewing it.

My bet's that BB's murderer is Electo being controlled by Master Mind Excello from within his lead-lined chambers.