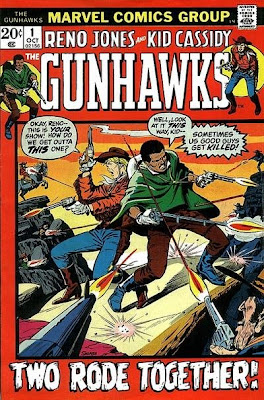 Kid Cassidy and Reno Jones debuted as The Gunhawks in 1972. Cassidy's family owned a plantation in the antebellum south and Jones was a black employee of the family who was also friends with the Kid. both fought for the Confederate States of America against the Union Army because Union soldiers had kidnapped Reno's lover, Rachel. After the Civil War ended, both continued to search for Rachel as wandering gunmen.
In issue #6, Kid Cassidy was murdered and Reno Jones was mistakenly blamed for the crime. With the next (and final) issue, the series was retitled Reno Jones, Gunhawk and Reno became the second black hero to headline his own Marvel Comics series (after the Black Panther who had taken over as the star of Jungle Comics).
The Gunhawks then pretty much fell into obscurity although they have been revived for a retconned mini-series in recent years.
Posted by Chuck Wells at 11:10 AM