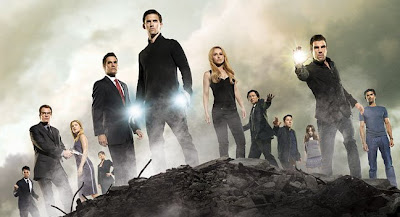 Season 3 of NBC's popular genre series, Heroes, premiered last night with a two hour opener. Volume III: Villains - 'The Second Coming' kicked off mere moments after shots rang out, as the shocking identity of Nathan's assassin and the reasons why the Texas press conference had to be cut short are revealed -- immediately throwing Peter and Matt into unexpected, uncharted territory. With his powers partially restored, Sylar decides a visit to Claire could give him a boost. Meanwhile, in Tokyo, Hiro and Ando are charged with safeguarding a family secret that could split the planet apart, and discover that the path to a grim future starts with shady speedster, Daphne (guest star Brea Grant). In New York City, thanks to Maya, Suresh makes a startling breakthrough that could change the world -- or just destroy his. And who is Tracy Strauss? George Takei (Star Trek), Malcolm McDowell (A Clockwork Orange) and Bruce Boxleitner (Babylon 5) also guest star.

And in the second hour - 'The Butterfly Effect', Angela Petrelli confronts her much-changed son, Peter, as the bursts of violence around them only hint at the catastrophes to come. First, Sylar declares war on the Company by attacking their main facility, and finds even more than he bargained for on Level 5. During a devastating battle with Elle (guest star Kristen Bell), a dozen savage criminals -- all with terrible abilities -- escape. Meanwhile, Claire discovers something new and unexpected about her abilities. Determined to reclaim his family's terrible secret, Hiro and Ando track Daphne to Paris. After a fateful night, Suresh is thrilled to find his research, his life and his relationship with Maya evolving in leaps and bounds. Stuck in unfamiliar territory, Matt finds a guide (guest star Ntare Mwine) to help him. Malcolm McDowell (A Clockwork Orange), Stephen Tobolowsky (Groundhog Day), Bruce Boxleitner (Babylon 5), and William Katt (The Greatest American Hero) also guest star.
Posted by Chuck Wells at 7:08 AM