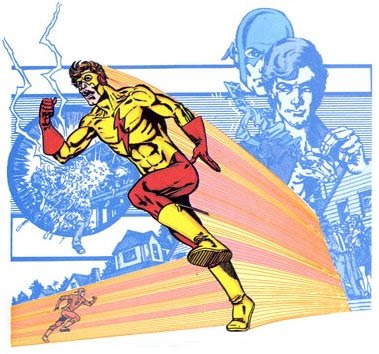 It's been a month since my special look back at the classic 1980's Wolfman/Perez New Teen Titans series left off, so sorry for the delay, and here we go again with a look back at the young hero who ultimately became the third scarlet speedster to be called the Flash.
Wally West is the nephew of Iris West (and therefore, Barry Allen's nephew by marriage), he was first introduced in The Flash vol. 1, #110 (1959). When Wally was about ten years old, he visited the Central City police laboratory where Barry Allen worked, and the freak accident that originally gave Allen his powers repeated itself, bathing Wally in electrically-charged chemicals. Suddenly possessing the same powers as The Flash, West donned a smaller version of Barry's Flash outfit and became the young crime-fighter known as Kid Flash.
Wally soon adopted a slightly different, yellow-and-red outfit with his hair exposed, and became a founding member of the original Teen Titans, along with fellow sidekicks Robin and Aqualad. Always something of a straight-shooter from rural America, Kid Flash sometimes felt out of place alongside more flamboyant heroes such as Speedy and Wonder Girl.
As a young adult, West was present when the Titans reconstituted as the New Teen Titans, but he eventually discovered that his powers were failing and even damaging his body. He retired from crime-fighting until a cure could be found for his condition. However, Wally was called into action again by the Crisis on Infinite Earths event, in which his uncle Barry Allen had vanished. As a side effect of the energies he was exposed to during that adventure, West's powers stabilized. However, he could no longer run at the same extraordinary speeds as his uncle. Wally’s powers were limited to the speed of sound and he had to eat vast quantities of food to maintain his metabolism. He chose to retire his Kid Flash identity and adopted the costume and name of the Flash to honor his uncle and maintain their heroic legacy. He did, however, make his identity public knowledge in order to keep from replacing Barry Allen in the minds of the public. This made him the first sidekick to actually take on the name (and role) of his mentor.
Posted by Chuck Wells at 8:01 PM