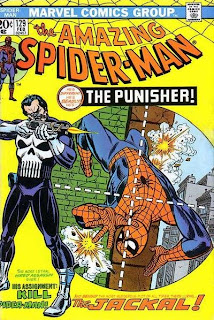 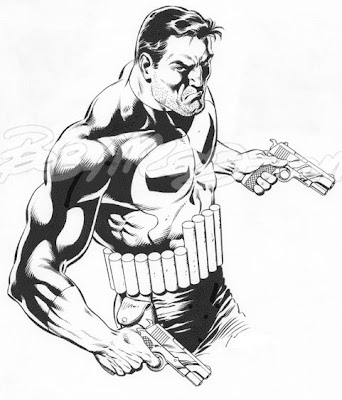 The Punisher was created by writer Gerry Conway and artists John Romita and Ross Andru; for his first appearance in Amazing Spider-Man #129 (Feb. 1974).

The Punisher is a vigilante who considers killing, kidnapping, extortion, coercion, threats of violence, and torture to be acceptable crime-fighting tactics. Driven by the deaths of his family, who were killed by the mob when they witnessed a gangland execution in New York city, Frank Castle waged a one-man war on the mob and criminals in general using all manner of weaponry. A Vietnam War veteran, Castle is a master of martial arts, stealth tactics, hand-to-hand combat techniques and a variety of weapons.
The Punisher's brutal nature and willingness to kill made him a novel character in mainstream comic books during the 1970's.
Posted by Chuck Wells at 1:26 PM

i'm looking forward to the film that's supposed to be coming out soon, too. . .

looks pretty sweet to me.