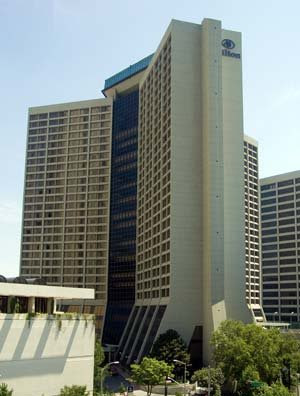 So, yes, it had been a few years since I had visited the Atlanta, GA-based Dragoncon, but others in my party had attended within the last 2-3 years.

One major thing has apparently changed in a dramatic way in regards to the celebrity guests. You can't take their pictures with your own camera, without paying for the privilege at $20 a pop.
I appreciate that the con-organizers have taken over issuing standard $30.00 the 8x10 glossy photos outside of the "Walk of Fame" hall, but gouging the paying public for using their own cameras by asking for $20.00 ticket (per guest) to use one's own camera is quite a stab in the back, regardless of the reasons for the change. It's a tough economy out here folks!
The only statement found on their webpage that I could find was:
"Autograph Sessions Director: Tom Gennaro
Each year, Dragon*Con assembles many of its willing guests for scheduled autographs (signings) in one area. Not every guest is willing - or able - to sign items, but we do inquire as to each guest’s willingness to do so.
Some guests-usually screen stars-charge for autographs, but autographs staged in our Autograph Area are always free. Limitations on number and type of items may be made, generally at the request of the signer, and sometimes due to time considerations.
Autographs will be handled on a first-come, first-signed basis. We will promote equal access for handicapped persons but this does not exclude them from the first-come, first-served rule; as with other convention attendees they will get their autograph in order of their arrival."
I already know all of the reasons why this practice could have been adopted. Many of the attendees debated this very point, as they were shuffled away from the taped off demarcation points in and around the five dozen media guests, after trying to snap a quick picture. You had to have the ticket (and it was only good for the day of purchase). The con runs for four days.
The problem that I have with this is simply that this aspect should have been prominently spelled out on the Dragoncon web page, it should have been displayed at registration (where folks who hadn't already prepaid for memberships, bought tickets for the show ranging from $50 to $90 bucks - give or take). As you entered the "Walk of Fame" an easel with pre-printed, bold-face rules of conduct was in place - with no wording to the effect that cameras were not allowed. No, that was hand written on a poster-size board on another easel located elsewhere in the large hall. If this was all standard policy, then the current Dragoncon board of directors sure went out of their way to disguise it.
The actors are the biggest "lure" to the con after all and not trumpeting this hidden extra charge was disingenuous.
Posted by Chuck Wells at 11:05 AM

My son and I went to the Atlanta Dragoncon about ten years ago. I was in my ecstasy when I came upon Al Fieldstein. As you know, Al was the second editor of MAD, starting with about the 29th issue. When I saw him he was very accessible and friendly. I asked him to pose for me to take his picture, then he called over a friend and had her to use my camera to take a picture of us together.
I had always preferred Kurtzman's brand of satiric humor, but after that day, I decided Al was a hero I overlooked. I'm glad I got to meet and talk to him.
I doubt if he even remembers it, but I do!

I saw Feldstein at this years Heroes Convention in Charlotte, NC and I agree with you that it was cool to speak with him.

This type of interaction used to be par for the course when I attended Dragoncon many years ago, but, well, things appear to have have changed. I will miss being able to stroll around and comfortably chat with the celebs that most interested me, without the volunteer-nazis assaulting me every few minutes and leading me off behind the taped off demarcation points - where tickets were not required. (Sorta like the higher nosebleed sections in most sports arenas.)

I guess that I feel worse for the fans who are there (Atlanta) to see the various genre authors. They were spread out all over the place, peppered throughout the dealers rooms and I don't think that I even spotted most of them during my visit.

At least, all of the comic book artists were crammed together in a small, windowless sub-basement-type room.

The comic artists nn the basement? I think that is where they were c1998 or 1999 when I took my son.
At that time undergrounder Skip Williamson lived fairly close and he got me the tickets.

"small, windowless sub-basement-type room" was just how their location impressed me, not marquee accomodations at all.

Dragoncon has alot going for it, but you really have to be prepared to shell out the dough for celebrity contact, and the comics portion of the event is continuing to die off, minimize, vanish, etc.