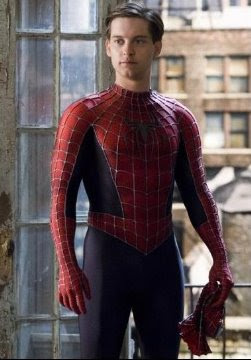 Actor Tobey Maguire will once again team up with director Sam Raimi for the fourth and fifth installments of the hugely successful "Spider-Man" franchise, according to the Hollywood Reporter.
In a cost cutting effort, Columbia plans to shoot the films back-to-back starting in fall 2009. "Spider-Man" is the studio's most successful movie franchise, with the first three films grossing $2.5 billion worldwide.
Producer Laura Ziskin would like to aim for a May 2011 release for "Spider-Man 4," which would be nine years after the original movie's debut.
Posted by Chuck Wells at 11:10 AM

Thats good news! I think Toby is perfectly cast for the part. Now we can only hope that the horribly miscast (In my opinion at least} Kirsten Dunst (I just threw up a little) doesn't return!

Hey, isn't that Blue Falcon in your Art Ephemera section?