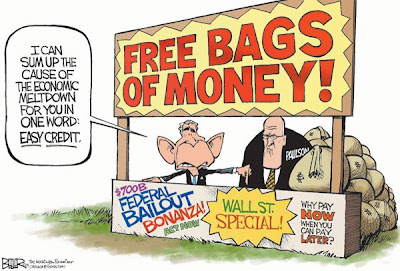 Despite the overwhelming tide of American voices speaking out against the monstrous economic bailout of big box Wall street financiers, and the heroic efforts of our Congress that killed the $700 billion freebie yesterday, odds are that some form of thievery will ultimately be foisted on us. Here from Cagle is a terrific cartoon that almost sums the whole mess up (It would be more appropriate if Pres. Dubya was holding six-guns "wild west-style" during his planned eleventh hour robbery of America!):
Posted by Chuck Wells at 1:39 PM