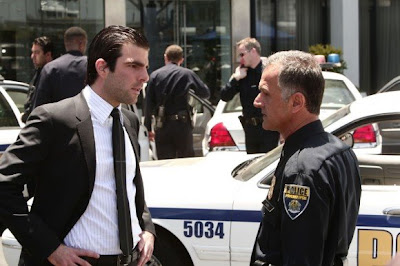 Fans of this increasingly dense series were treated to a smorgasbord of plot lines that (we are promised) will coincide at some point, but unlike genre series of decades past where an over-riding premise allowed writers to produce scripts that utilized the available characters to tell engaging stories, Heroes seems to have fallen victim to an overblown lack of direction that has to tie in every bit of minutia to an "overall" paranoid conspiracy - - - like every other genre show these days.
Don't think so? Here is a break down of last nights episode (spoilers ahead) ....
Sylar is suddenly a heretofore unknown "Petrelli" sibling? Hiro & Ando, who are trying to prevent super-speedster Daphne from acquiring the other half of Kaito Nakamura’s secret formula, stand around as if they’ve got all the time in the world (and end up becoming victims of the Haitian)? Nathan’s mysteriously manifested new age conversion to Christianity, post-assassination attempt personality crisis (or more manipulation courtesy of the ghostly Mr. Linderman)? Future-Peter floundering around the edges of what went wrong with his grand time-altering scheme, finally frees Current-Peter from his psychic prison inside escaped Level 5 bad ass, Jesse (and in the process, leaves HRG somewhat in the lurch for new partner-Sylar to rescue)? Claire snubs her adoptive-mother, then asks for "hero-training" from birth-mother Meredith (who then turns up the heat on her daughter, leeching away the breathable oxygen; yet somehow Meredith is able to breath just fine within the closed confines of the cargo container)? Matt Parkman goes on a sub-Saharan, African spirit walk with deceased former hero, Isaac (NO; just a mysterious new guy who has Isaac’s exact-same-future-painting-powers and this guru can mix up a convenient batch of local herbs to grant Officer Parkman a similar trance-induced-walk-on-the-wild-side)? Nikki-Jessica IS really dead, and Tracy Strauss is her, what, clone (possibly one of many; sheesh)? This volume of "Heroes", called ‘Villains’, has given us supposedly powerful new threats in the form of fear-mongering Knox and, but wait, they just wiped out the German AND Jesse in one fell swoop, shot the bald redneck Flint and then quickly tossed his fire-wielding ass back into the Prima-Tech pokey …. (So, maybe these guys are'nt so threatening after all)? And Angela Petrelli a villain? NO. She’s just a bitch.
I don't believe that creator Tim Kring really has any clear idea of where this series is headed. He's just spinning the wheel and playing around with a general idea, that is already repeating beats from the previous two seasons. Not a good sign of things to come!
Posted by Chuck Wells at 9:36 AM

Agree. As usual, the hot series turns into shit after 1 good season. Want to know why? At the end of season 1, Sylar gets killed and both Petrelli Bros. explode.
At the beginning of season 2, Sylar is alive and the Petrelli's are just confused. So stop watching it because season three has an earth shattering climax -
The world will be destroyed if the Heroes don't do something. And then season 4 will begin with that apocalyspe averted but another is brewing in the background and will be averted in season 5 opening 2-hour blockbuster premier!!! To be followed by season six character
development for season 7's earth shattering apocalypse. See, it's shit.