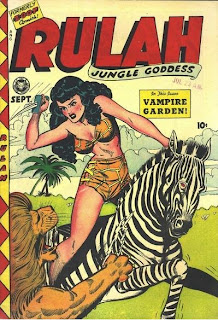 Famed golden age artist Jack Kamen passed away from causes related to cancer on August 5, 2008.
Kamen had worked as an illustrator for Western and detective pulp magazines when he was drafted into the Army in 1942. After World War II, he started drawing comic books for Fiction House and Iger Associates, eventually getting assignments from EC Comics to illustrate romance comics. He became one of the most prolific EC artists, drawing crime, horror, humor, suspense and science fiction stories, and was known for his drawings of pretty women.
Shown (right) is Kamen's cover illustration for Fox Comics Rulah Jungle Goddess #18 (Sept. 1948).
Posted by Chuck Wells at 2:40 PM

Ah. I didn't realize Jack Kamen drew some Rulah. Kamen was quite successful at raising accomplished children, too!