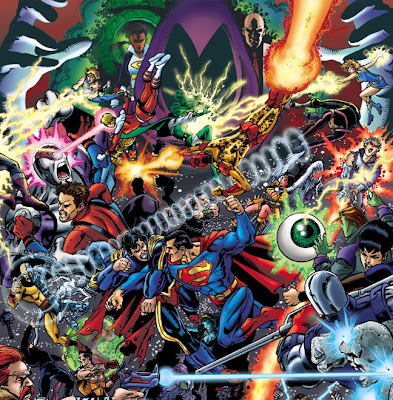 The only "Final Crisis" material that I'm the least bit interested in has finally hit the stands. Final Crisis: Legion of Three Worlds #1 (of 5) begins with old Legion foe the Time Trapper plucking Superboy-Prime from the time stream to help rid him of his perpetual enemies.
Fans of the Legion and Superman are in for a treat from Geoff Johns and George Perez, as the two have thrown in many aspects from Legion history to whet one's appetite for classic comics which feature not one, not two, but three different versions of the venerable Legion of Super-Heroes.
Playing off of plot-threads from the recent "Superman and the Legion of Super-Heroes" storyline by Johns, which ran for six issues over in Action Comics, Lo3W kicks things of in high style as the now xenophobic Earth population really wants the antiquated Legion to pull up stakes and leave Earth solely for humans. An equal number of the United Planets member world delegates pretty much feel the same way about the matter, and then old supporting character R.J. Brande makes a surprising appearance which ultimately leads to catastrophe.
And that sets up Superboy-Prime's liberation of a certain "alternate" group of Legionnaires for the big conflict ahead.
I recommend this series to all who enjoy good superhero slug fests.
Posted by Chuck Wells at 2:46 PM

Yeah, I'm not following most of the Final Crisis stuff, but Pierre recommended this to me, and I really liked the first issue!

...not sure how it will make the series a viable franchise again, but I'm willing to see where they go with it. :)