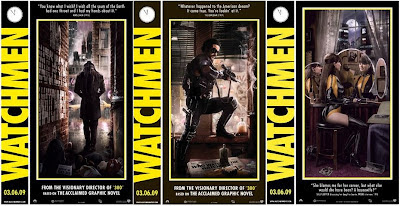 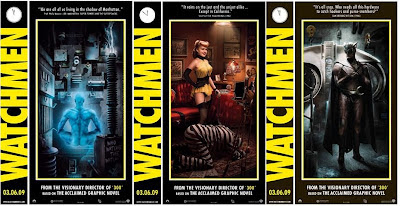 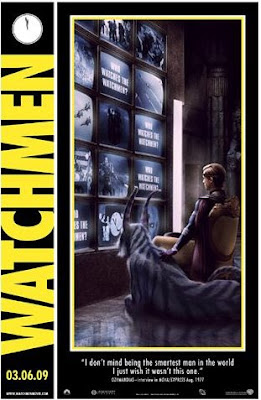 I may be preaching to the choir here, but the only aspect of next years long awaited movie adaptation of the classic comic book series Watchmen, that pisses me off, is how very heavily it is being touted by the studio, the media and even some of the films creators (including director Zack Snyder & even a few of the actors involved) as a "graphic novel".

Watchmen was a twelve-issue monthly comic book, limited series originally published by DC Comics from 1986 to 1987 and written by Alan Moore and illustrated by Dave Gibbons. Yes, it was later republished as a trade paperback, and it was also collected in hardback form, and even later in the hardbound "Absolute Edition" format which finally incorporated some of the French portfolio artwork that Gibbons had produced after the original series had ended. We need not debate the modern practice of today's comics publishers and current writers crafting their monthly stories in dubious, internal story "arc's" [within the traditional "comic book" format] in order to facilitate issuing trade versions for the book store customers who only read this kind of stuff that way. Let's say that is a given; and to date, Watchmen remains the only "graphic novel" to win a coveted Hugo Award, plus it is also the only graphic novel to appear on Time Magazine's 2005 list of "the 100 best English-language novels" published since the founding of the magazine in 1923. However, I simply abhor their vehement desire to reference the terrific Watchmen series as anything other than a comic book. That's what it was, damn it!
Watchmen was set in 1985, in an alternate history United States where costumed adventurers were real and the country was edging closer to a nuclear war with the Soviet Union (the Doomsday Clock was permanently set at five minutes to midnight). It told the story of a group of past and present superheroes and the events surrounding the mysterious murder of one of their own. Watchmen depicted superheroes as real people who confronted ethical and personal issues, who struggled with various neuroses and failings, and who—with one notable exception—lacked anything recognizable as super powers. Watchmen's deconstruction of the conventional superhero archetype, combined with its innovative adaptation of cinematic techniques and heavy use of symbolism, multi-layered dialogue, and meta-fiction, influenced both comics and film in its wake.
But, it WAS a comic book. I guess promoting it as a comic book would be embarrassing. Much better to proclaim it as a "graphic novel". Even "trade paperback" wouldn't have the kind of kitsch in certain elite circles. But, it was a comic book, folks. Get over it!
Re-presented (above) for your edification & enjoyment (courtesy of AICN) are the individual character posters which were debuted at Comic Con in San Diego.
And yes, Watchmen, despite any other format in which it is collected, will remain a classic comic book series. Got it? Good.

Watchmen is a comic-book, just one in a class of it's own, that's all.

Which reminds me, is the movie gonna have any of the pirate stuff in it?

Karswell, Zack Snyder is doing something with "Tales of the Black Freighter" and "Under the Hood". Both were backup features in the original series, for inclusion on the Watchmen DVD.

Wolfkahn, that's EXACTLY the point that I'm trying to make, but folks who sneer on the term "comic book" don't seem to make this distinction - - - hence the long look down their noses at comics material. Calling a comics genre property a "graphic novel" apparently makes this stuff more palatable for their refined tastes.

Chuck, those of us who like the term "comic book" are overwhelmed by those to whom the term means something childish. If "graphic novel" allows non-comic book fans to look at comics then so be it.

When I re-read Watchmen I read it in its original comic book issues. There's nothing wrong with the trade paperback, but I like to remember how I felt when I was reading these issues in their original incarnation. They gave me a genuine sense of wonder.

A graphic novel is indeed just a longish comic book or story.

People complain about things they dont even bother to carefully consider.

There isnt any hard definition for the term graphic novel beyond it being a longer than normally found comic story.

The term is just a fancypants way of making the medium feel more serious than the word "comic" suggests to American readers.