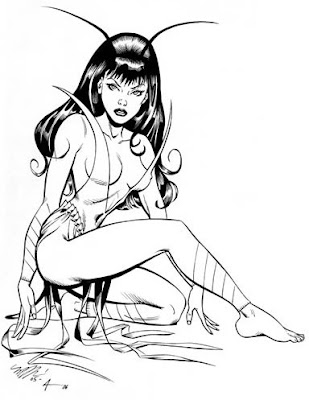 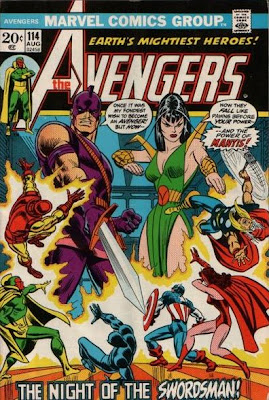 Mantis first appeared in Avengers #112 (June 1973). She was created by writer Steve Englehart, who has taken her (albeit in slightly different name and form) through books published by other comic book companies, moving first from Marvel to DC to Eclipse to Image and finally back to Marvel again. Mantis is the half-Vietnamese, half-German daughter of Gustav Brandt (aka Zodiac member, Libra). While in her childhood she was left at the Temple of the Priests of Pama, a splinter sect of the alien Kree. The Kree believed that she might eventually become the Celestial Madonna and ultimately mate with the eldest Cotati on Earth to become the mother of the Celestial Messiah, "the most important being in the universe."
She excelled in her martial arts studies, but when she reached adulthood, she was mind-wiped and sent out into the world to gain life experience. She became a prostitute and barmaid in a Vietnamese bar, where she met the Swordsman and helped him regain his self-respect and then followed him when the former villain reformed and joined the Avengers. She too became an Avengers ally when the Swordsman rejoined the Avengers, and she battled alongside the team as they faced such threats as the Lion God, the Star-Stalker, Thanos and Ultron.
While with the Avengers, Mantis became infatuated with the Vision, and — although she was rejected by the android — she neglected her relationship with the Swordsman. Alongside the Scarlet Witch, she was abducted by Kang the Conqueror and was soon revealed as the true Celestial Madonna, but Mantis sadly witnessed the murder of the Swordsman at the hands of Kang, and it was only then that she proclaimed her own love for the Swordsman as he died in her arms. With the Avengers present, she buried the Swordsman. Mantis soon discovered the true origins of the Kree-Skrull War, the Cotati race, and the Priests of Pama; she formally joined the Avengers and married a Cotati who was occupying the reanimated body of the Swordsman, then she left the Avengers and Earth in order to mate with him.
Posted by Chuck Wells at 7:10 PM