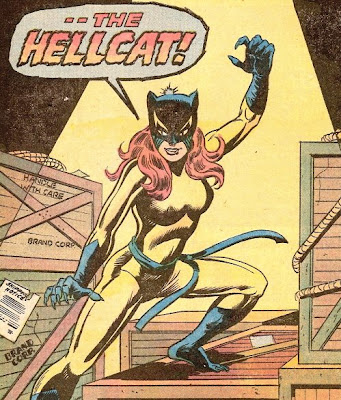 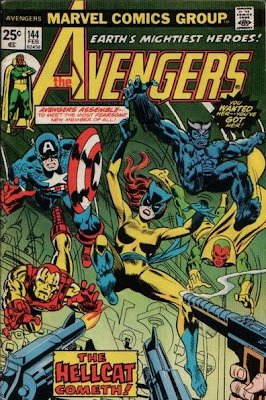 Patsy Walker was created by Ruth Atkinson, and made her first appeared in Miss America Magazine #2 (Nov. 1944), published by Marvel precursor Timely Comics. Patsy was originally the star of a long-running teen romance series.
Later Patsy embarked on a new career in Amazing Adventures (vol. 2) #13 (July 1973). There, she met Hank McCoy, one of the original X-Men, in his alter ego as the Beast. She had become dissatisfied with her married life to Buzz Baxter, and after she aided the injured Beast, Patsy asked for a costume in return, “something with powers, or a serum, or anything”, now wanting to become a superheroine.
Shortly afterward, the Avengers, with Beast and Walker tagging along, invaded the complex of buildings belonging to the Brand Corporation. Now a subsidiary of Roxxon, a multinational conglomerate, Brand was also where Walker's estranged husband, an Air Force colonel, was posted. There they found one of superheroine Greer Grant's spare Cat costumes. Patsy Walker immediately donned the yellow cat-suit and dubbed herself "Hellcat" in The Avengers #144 (Feb. 1976).
Posted by Chuck Wells at 9:12 PM

...and of course she later married one of my favorite offbeat heroes of the 70's, the Son of Satan. :-)

I also should have mentioned that George Perez was the artist that introduced Patsy as Hellcat.

Actually, the costume Patsy and co. found was not one of Greer Nelson's castoffs. If you check the original The Cat series, you'll see the Cat uniforms Mal Donalbain provided all had a blue "cat's paw" emblem on the chest. You can also see it in the flashback George Perez included, showing Greer on a Chicago rooftop. The Hellcat costume doesn't have one.

Also, in the original series you'll see the women who wore the Cat uniforms were enhanced physically and mentally by Dr. Tumulo's process. Patsy had no such enhancement. My explanation for this seeming contradiction is Roxxon (and Brand) heard about the Cat second-hand, in the same manner Iron Man describes hearing about her. They were already creating super-powered agents, and whipped up the costume that Patsy donned. A similar agent, Manticore (see Ghost Rider #27), even boasts his enhancments were created by the same people who created the Hellcat costume.
Hope this helps!