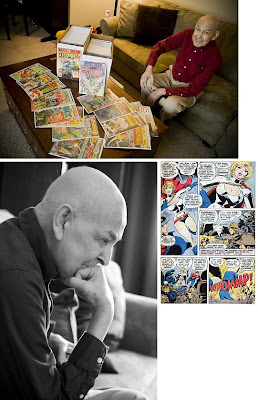 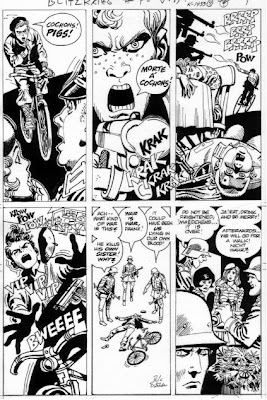 Comic book artist Ric Estrada was born in Havana, Cuba. Although they never met, he was a schoolmate of Fidel Castro's at the University of Havana. Estrada later met author Ernest Hemingway, who facilitated Estrada's move to New York City in 1948 to further his artistic studies and start a career.
In the 1950s Estrada penciled and inked Bunker, the first comic book ever to feature an African-American hero and Rough Riders. Both stories were for the classic EC Comics series Two-Fisted Tales, however much of Estrada's comic-book career was spent working for DC Comics. Though superheroes were not his preference, Estrada worked on Superman, Batman, Wonder Woman, All-Star Comics (where he helped revive the Justice Society of America), Richard Dragon Kung Fu Fighter, and he co-created Power Girl with Joe Orlando. Estrada also drew detective, romance, war and a few horror stories for DC. His preference was for the war stories. Among the war titles he worked on for DC Comics were GI Combat and two series, Blitzkrieg and Gallery of War, both written by Bob Kanigher.
While working on GI Combat #169 for DC Comics, Ric filled a page shortage with an account from the Book of Ether, a short book of scripture contained in the Book of Mormon. That story came to the attention of Hugh W. Pinnock who was in charge of creating a comic-style adaptation of the New Testament for the Church of Jesus Christ of Latter-Day Saints, and in 1980 Estrada (a long-time LDS church member) drew all the pictures for that book, which remained in print for twenty-five years, and is now freely available on the web.
Ric Estrada was the subject of an upcoming feature-length documentary film, and he was working on an illustrated version of his personal memoirs when he passed away at the age of 81, on May 1, 2009 after a lengthy battle with prostate cancer.
Condolences go out to his family, friends, and many fans.
Posted by Chuck Wells at 4:29 PM