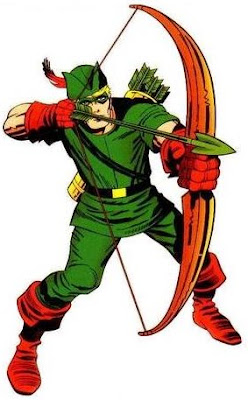 Green Arrow (and Speedy) first appeared in More Fun Comics #73 in 1941. His secret identity was Oliver "Ollie" Queen, billionaire and former mayor of fictional Star City. The original character was created by editor Mort Weisinger and artist George Papp. Dressed like Robin Hood, Green Arrow was an archer, who invented trick arrows with various special functions, such as a glue arrow, a net arrow, explosive arrow, time bomb arrow, grappling arrow, fire extinguishing arrow, flash arrow, tear gas arrow, cryonic arrow, a boxing-glove arrow, and even a kryptonite arrow.
Aside from the obvious allusions to Robin Hood, Mort Weisinger was inspired by a movie serial, The Green Archer (based on the novel by Edgar Wallace). Weisinger retooled the concept into a superhero archer with obvious Batman influences. These included his kid sidekick Speedy, his use of an Arrowcar and Arrowplane, his use of an Arrowcave as headquarters, his alter ego as an billionaire playboy, the use of an Arrow-signal to summon him, and even a clown-like arch foe named Bull's Eye (similar to Batman's arch-foe, the Joker).
Another Weisinger-created character called Aquaman also appeared for the first time in that issue, and the two back-up features continued to run concurrently in More Fun Comics until the mid-1940s, and later in Adventure Comics from 1946 until 1960. Green Arrow and Speedy also appeared in various issues of World's Finest Comics until issue #140 (1964). The Green Arrow and Speedy feature proved popular enough to be promoted in one of the earliest team-up books, Leading Comics. They were founding members of The Seven Soldiers of Victory (famously rescued in a 1970's Justice League of America/Justice Society of America crossover).
Green Arrow was one of a handful of DC characters to continue after the golden age of comic books. The longevity of the character was due to the influence of creator Mort Weisinger, who kept Green Arrow and Aquaman as back-up features to the headlining Superboy feature, first in More Fun Comics and then Adventure Comics. Aside from sharing Adventure Comics with him, #258 featured an encounter between a younger Oliver Queen and Superboy. The Green Arrow and Speedy feature during this period included a short run in 1958 by artist/writer Jack Kirby (whose artwork is included with this post).
Posted by Chuck Wells at 9:33 PM