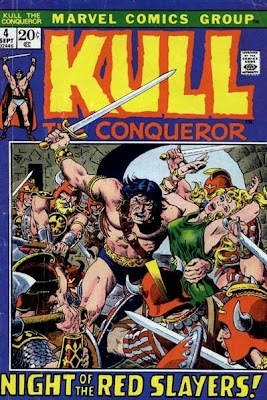 Kull of Atlantis (or Kull the Conqueror) was originally created by Robert E. Howard in 1929, Howard was also the creator of Conan the Barbarian, Solomon Kane, and Bran Mak Morn. The character was written as being more introspective than the subsequent Conan, whose first appearance was actually a re-write of a previously rejected Kull story.
Kull was later adapted by Marvel Comics with three Kull series published between 1971 and 1985. Kull also appeared several times in the The Savage Sword of Conan series and the character was the lead in the similar three issue black & white, magazine-sized Kull and the Barbarians. Marvels standard format Kull comic was published sporadically during its existence, and there were in fact no issues published during 1975. However the true heyday of the Kull the Conqueror series were the first ten issues which were written by Roy Thomas, Len Wein or Gerry Conway, and which were very beautifully illustrated by Marie Severin and her brother, John Severin. Ross Andru, Wally Wood and Frank Chiaramonte also contributed some artwork to these issues between January 1971 and September 1973.