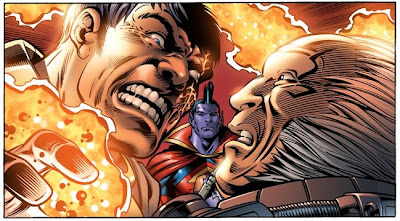 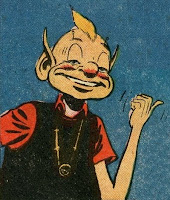 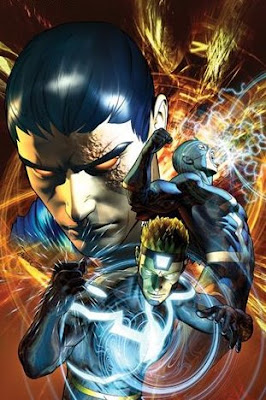 Before I comment on the contents of Marvel Comics War of Kings #3 (of 6), I want to mention one of the issues full page house ads. Near the back half of this issue, Marvel has a page promoting their Guardians of the Galaxy series, a book that I was happily buying, as "One of the best titles around!" (quoted from ign.com).
I used to agree with that sentiment, but despite Dan Abnett & Andy Lanning remaining with that series as writers throughout their providing the very same duties for the current War of Kings mini-series, something is definitely missing from Guardians of late.
This issue demonstrates what is actually lacking in Guardians (at least for me) since the rest of the creative team from Guardians, artists Paul Pelletier & Rick Magyar and colorist Wil Quintana followed the writers over to this mini-series.
The penciled, inked and colored artwork by these guys is fun, epic, cool and everything else that Guardians was when they were on that title. For me, War of Kings is pretty much six missing issues of Guardians of the Galaxy, and after sticking around for a couple of the post-Pelletier/Magyar issues, I had to drop the book.
Now, let’s talk about War of Kings #3. "The Head That Wears The Crown" begins with Shi’Ar Emperor Vulcan on the verge of slaying the captured Majestrix Lilandra, before Admiral Ka’Ardum and Gladiator manage to convince him not make her a martyr. Vulcan, who is the wayward brother of X-Men Cyclops and Havok, is a bit off of his nut. He is mad! Insane. I understand that the bad guy is supposed to be villainous, but frankly, I don’t see what the appeal of this guy is to the Shi’Ar, or why Gladiator blindly follows this whacked out faux-Emperor. We’ll come back to this point shortly.
After a brief update on how the war is unfolding for the Kree, and the efforts of the ruling Inhumans to jumpstart the evolutionary dead end that the Kree have been mired in, Crystal overhears a comment by Maximus that indicates that she may not be fully in the loop when it comes to the Royal Family’s complete agenda.
Suddenly, the action leaps back to the captured Lilandra enroute to a very public trial, before Vulcan can get away with executing her for crimes against the empire, and the combined Starjammers and Guardians of the Galaxy arrive to rescue their friend. Havok, Polaris and Korvus unleash their might on Gladiator, but it’s Rocket Raccoon of all people (?) who pulls the best gimmick on the Praetor of the Imperial Guard. Rocket blasts Gladiator with a Xarthian Quantum Cannon, causing the nigh-invincible being tremendous pain and taking him effectively out of the battle. This feint allows Drax, Groot and Major Victory to get their licks in before, oops, Gladiator realizes that he’s simply under a telepathic assault by Marvel Girl and he can’t be affected by the Xarthian weapon; apparently they have no such weapon. It is actually a weakness of Gladiators that if he loses his confidence in his own might, he can be affected by such attacks. Anyway, he quickly mops the floor with the entire gang and takes off to prevent Lilandra’s escape, but wait a minute; she is able to convince him that he may be loyal to an Emperor who is unworthy and, too bad for replacement Imperial Guardsman, Smasher. Gladiator declares his service to Lilandra, after blasting of the top of Smasher’s head to close out this issue.
War of Kings is proving to be a lot of fun, and as we are now past the halfway point, we should see more of the actual kings in question rising to the front of this war. Give this book a try! It is one of the best things that Marvel has out there at the moment.
Posted by Chuck Wells at 12:14 PM