From the Dust Bin: The Phantom Lady 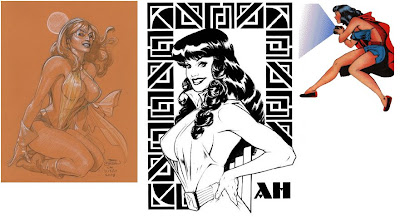 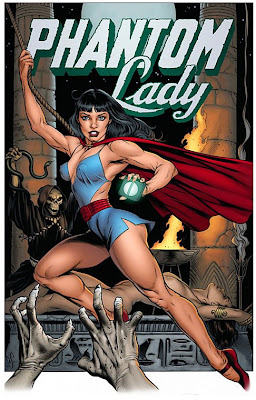 Phantom Lady was originally published during the golden age by Quality Comics, however after her creators in the Eisner-Iger shop split up, the character was published over the years by a series of now-defunct comic book companies including Fox Features, Ajax-Farrell, Charlton, I.D.W./Super Comics, and the character is currently "owned" by DC Comics (despite claims that Phantom Lady is in the public domain).
As published in the late 1940s, the busty and scantily-clad Phantom Lady is a notable and controversial example of "good girl art," a style of comic art depicting voluptuous female characters in provocative situations and pin-up poses that contributed to widespread criticism of the mediums effect on children. The character's early adventures were drawn by Arthur Peddy.
Phantom Lady first appeared in Quality's Police Comics #1 (Aug, 1941), an anthology title which also included Plastic Man and the Human Bomb. That appearance established her alter ego as Sandra Knight, the beautiful Washington, D.C. debutante daughter of Senator Henry Knight. One night, Sandra stumbled upon two would-be assassins targeting her father, and stealthily thwarted them with a rolled-up newspaper. Sandra consequently developed a taste for adventure and crime-fighting, and after receiving a "black light ray projector" from a friend named Professor Davis, she adopted the device as a weapon to blind her enemies, or turn herself invisible.
She adopted the identity of Phantom Lady in a costume consisting of a green cape and the equivalent of a one-piece yellow swimsuit. Decades later DC Comics altered details of her origin by explaining her skimpy costume as a deliberate tactic to distract her predominantly male foes.Phantom Lady continued as one of the features in Police Comics through #23.
After Quality stopped publishing Phantom Lady, Iger Studios believed it owned the character and assigned it to Fox Feature Syndicate, a move that would later cause confusion as to who actually owned the character's copyright. The Fox version is better known to contemporary comic fans than the Quality version because of the "good girl art" of Matt Baker. Baker altered her costume by changing the colors to red and blue, substantially revealing her cleavage, and adding a very short skirt. Fox published Phantom Lady only through issue #26 (Apr, 1949), though the character guest starred in All-Top Comics #8-17, also with art by Baker.
Baker's cover for Phantom Lady #17 (Apr, 1949) was reproduced in Seduction of the Innocent, the 1954 book by Dr. Fredric Wertham denouncing what he saw as the morally corrupting effect of comics on children. The cover, which illustrated Phantom Lady attempting to escape from ropes, was presented by Wertham with a caption that read, "Sexual stimulation by combining 'headlights' with the sadist's dream of tying up a woman."
(Illustrations above; top by Terry Dodson, Adam Hughes and Matt Baker and above; right by Dave Stevens).
Posted by Chuck Wells at 12:36 PM

A comparison of the Matt Baker and David Stevens versions of Phantom Lady clearly shows how idealized images of female sexuality have changed since the 1940s and 50s.

Baker's Lady has smooth "girlie" arm and leg muscles, a la Bettie Grable and Marilyn Monroe. The exaggerated musculature on Stevens' version would have been considered mannish and unappealing back in the mid-twentieth century.

I'm heading to DC in a couple of weeks. One of my goals is to spend a couple of days at the Library of Congress and see what I can actually ascertain about the various claims to the ownership of the Quality characters. 'Course Phantom Lady is a different animal altogether in that she was published at two different companies after her days at Quality.

However, while the copyrights issues are up for debate, by this point DC does have a clear claim on the Trademark which has has different rules governing it. But, that only prevents using new artwork featuring her or her name on covers, as a title, and in advertising NOT appearances in an actual story.

bought PL #17 from a30+yr contributor/consultant to the Overstreet Price Guide about 1978 in (my opinion) Fine+/VF+ condition for $750.It is my prize. Thanking Jack Kamen for his interpretations of Matt Baker-and Frazetta for his Great work, along with modernists like Dave Stevens,Mark Beachum and of course Jim Steranko, with a kudo to Ale Garza, kindly keep on keeping on GGA. 60 yrs old and am enthusiastic as ever.