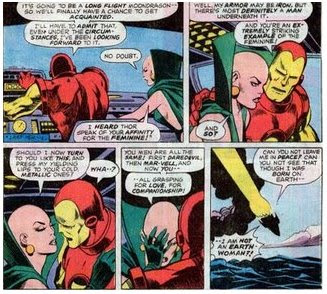 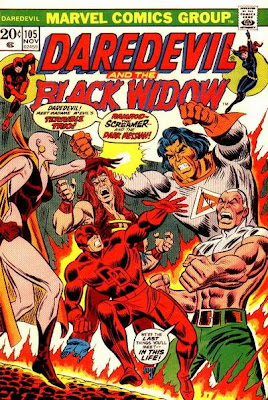 Moondragon was created by Bill Everett, Mike Friedrich and George Tuska. A powerful telekinetic, telepath, and martial artist, Moondragon's most notable characteristics are her shaved head, arrogance and a superiority complex. She first appeared in Iron Man #54 (January, 1973).
Heather Douglas was still a girl when her family accidentally happened to see the spaceship of Thanos land; the space villain didn't want any witnesses, so he blew up their car. Heather was thrown clear and survived, but her parents were killed. (She later discovered that her father's reanimated corpse was made into Drax the Destroyer.) She was taken by Thanos' father, Mentor, to his home world, Titan, to be raised by the monks of Shao-Lom. Heather developed her physical body to its full potential, becoming a formidable martial artist. The priests taught Heather various scientific disciplines such as chemistry and genetic engineering; but most significantly, they helped Heather tap into her latent psionic powers, present within all humans. Heather ultimately developed her mental powers far beyond even those of her teachers, so much so that she contacted a powerful entity called The Dragon of the Moon. The Dragon tried to corrupt her, but she fought back, driving the Dragon away. This victory filled her with pride, and she took the name Moondragon as a result. Unknown to Heather, the Dragon subtly continued to influence her on an unconscious level.
Her choice of the name Moondragon caused an uproar amongst the monks of Shao-Lom, to the extent that Mentor had to confront her on the matter. After the confrontation, Moondragon requested to be brought back home. Some time later, Thanos attacked his native Titan, destroying the monastery of the Shao-Lom monks. Moondragon escaped in her spaceship and fled to Earth under the guise of "Madam MacEvil" for the purpose of developing means to combat Thanos; this led to her creation of villains like Angar the Screamer, Ramrod, and the Dark Messiah. In her first appearance, she forced Iron Man to battle Namor, in order to study them. She then revealed her true identity and helped the Avengers in their first confrontation with Thanos.
She also battled Daredevil, and briefly restored Daredevil's sight using her alien pressure point skills, and then they met Captain Mar-Vell. She aided the heroes against Angar, the Dark Messiah, and Terrex. Although she had fallen in love with Daredevil, Moondragon returned to outer space where she aided Captain Mar-Vell, Drax, and the Avengers against Thanos.
Moondragon was one of the three candidates thought to be the "Celestial Madonna" who was prophesied to give birth to a universal savior, but she lost out to Mantis. She then became an adventurer, and joined the Avengers. Moondragon was also present when the Avengers confronted Korvac; her powers allowed her to see into his mind while they fought, and she decided that his goal of saving the universe by ruling it was ultimately noble; so she stayed out of the battle until Korvac committed suicide.
Posted by Chuck Wells at 8:50 PM