Spawned in the Underground 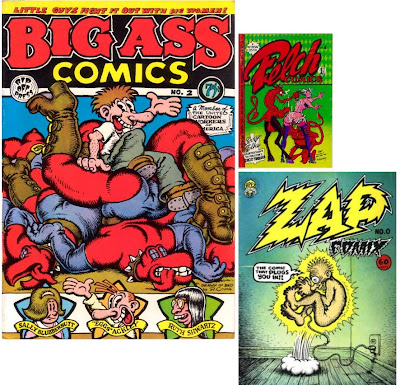 Yesterday I spent a terrific Saturday afternoon hip-deep in some of the most hilarious, raunchy and funny (& fun) comics that this genre ever produced – albeit way out on the fringe of the medium.

Over the last year, my brother has begun picking up high grade copies of various underground comix and what a horde of antidisestablishmentarianism treasures these things turned out to be! You know, for all the hoopla over mainstream “event” comics, endless weekly comics variations and gimmicked-up alternate covers for aging fan boys with more money than sense; this is the kind of comic stuff that you would think would be on everybody’s “must have” list, but hey, that just leaves more for us who really know better. What was on yesterdays reading list? I thought you would never ask.

Underground comix reflected the concerns of the 1960s counterculture: experimentation with drug-altered states of mind, rejection of sexual taboos, and ridicule of the establishment. The spelling 'comix' was established to differentiate these publications from mainstream 'comics'. The notion of comic books outside the mainstream was suggested by Harvey Kurtzman when he used the headline "Comics Go Underground" on the newspaper-format cover of Mad #16 (October, 1954).

Most mainstream comics are produced by a team including a writer, a penciler, an inker, a letterer, and an editor, while underground books are typically done by a single person. As it can take very long for a single artist to produce a full-length work, many underground artists contributed shorter works to anthology comic titles. A well-known example is the comic Funny Aminals (1972), edited by Terry Zwigoff with short pieces by Crumb, Griffith, Lynch, Spiegelman and Shary Flenniken.
Underground comix were largely distributed though a network of head shops which also sold underground newspapers, psychedelic posters, and drug paraphernalia. In the mid-1970s, sales of drug paraphernalia was outlawed in many states and the distribution network for these comics (and underground newspapers) dried up. Although many of the underground artists continued to produce work, for all intents and purposes, the underground comix movement is considered to have ended by 1980, to be replaced by a rise in independent, non-Comics Code compliant publishing companies in the 1980s and the resulting increase in acceptance of adult-oriented comic books.

The most popular underground comics have been reprinted many times and can be obtained relatively easily, however many comix were produced in single, small print runs, and are now rare. Records of comix produced are less complete than those for mainstream comics. Jay Kennedy’s, The Official Underground and Newave Comix Price Guide published in 1982, is one of a few relatively complete and authoritative reference volumes on comix.
Posted by Chuck Wells at 8:22 AM