At the Movies: Terminator Salvation 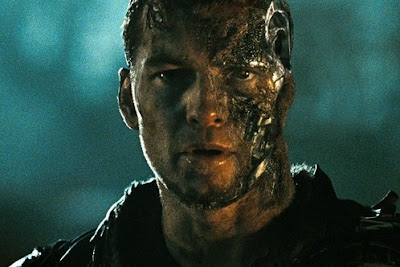 Terminator Salvation, written by John Brancato and Michael Ferris and directed by McG, is the fourth film in the Terminator series. The film stars Christian Bale as future Resistance leader John Connor and Sam Worthington as cyborg Marcus Wright. The film introduces a younger version of Kyle Reese, the doomed protagonist from the original 1984 film, played by Anton Yelchin (also in theaters as Chekov in Star Trek), as well as depicting the origin of the T-800 Model Terminator (made famous by Arnold Schwarzenegger). Terminator Salvation is set in the year2018, and relates the tale of the long teased war between humanity and Skynet.

Several of the guys over at Ain't It Cool News ripped it a new one, and at best the film has had mixed reviews. Some of this may have stemmed from a widely reported incident onset by actor Christian Bale, but I caught it over the weekend (when Angels and Demons late show was the closed caption version, so I took a pass).

I didn't think that it was too bad. To me Bale doesn't phone in his performance, as I had been led to believe. Sam Worthington is totally cool & awesome in this movie and I am now really looking forward to his role as Perseus in the Clash of the Titans remake. Anton Yelchin is really effective as Kyle Reese, Moon Bloodgood is sexy, but I feel cheated that they cut her topless scene (it had better make the DVD release) and Bryce Howard is even sexy in her rather limited role of Kate.

The effects are plentiful and well done, and it was nice to hear Linda Hamilton's voice over work. Of course, once the word was issued that the Governator would allow his image to be used in the film, anticipation was high for his old T-800 Terminator, and here McG truly delivered. T-800 doesn't show up until near the end, but his appearance is excellent.

I recommend seeing it in the theaters, but I know that a lot of you will wait for the DVD.
Posted by Chuck Wells at 10:02 PM