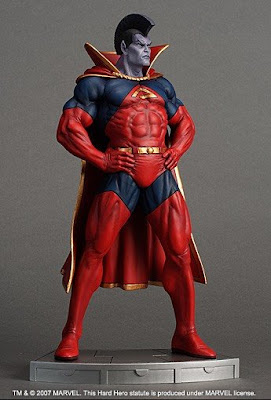 Due to his role in the current War of Kings event, I thought that it would be nice to profile one of my favorite X-Men supporting characters. Gladiator first appeared in X-Men #107 (October 1977), he was created by writer Chris Claremont and artist Dave Cockrum in homage to Superman (since the Imperial Guard itself is an analog of the silver age Legion of Super-Heroes).

Gladiator is the Praetor (or leader) of the elite corps of the Shi'ar Imperial Guard — an army of powerful beings that enforce Shi'ar Imperial law on all planets within the Shi'ar Galaxy. The elite corps also protects and carries out the personal directives of the majestor or majestrix (emperor or empress) of the Shi’ar Empire. His given name is Kallark.
Gladiator's first known encounter with humans occurred when the Imperial Guard battled against the X-Men at the command of then-Shi'ar Emperor D'Ken. Gladiator and the Imperial Guard later fought the X-Men when new Shi'ar Empress Lilandra Neramani and Professor Charles Xavier arranged a trial-by-combat to determine the fate of the then out of control Dark Phoenix. Later still, Gladiator aided the X-Men in battle against the renegade Imperial Guardsmen who were serving the traitorous Shi'ar, Lord Samedar.
Gladiator once arrived on Earth and battled the Fantastic Four in the mistaken belief that they were Skrull shape-shifters. With the help of both Spider-Man and Captain America, the real Skrulls were exposed and captured. Gladiator was also present at the intergalactic trial of Reed Richards (for saving the life of Galactus).
Lilandra's sister, Deathbird, eventually staged a successful coup and became the new majestrix of the Shi'ar Empire. Despite Gladiator's loyalty to Lilandra and his reservations about certain aspects of Deathbird's rule, he continued to serve the Shi'ar Empire as Praetor of the Imperial Guard.
As a member of the Strontian race, Gladiator possesses a number of superhuman capabilities as a result of his unique alien physiology. He has superhuman strength, speed, stamina, durability, and reflexes, and is able to survive without breathing for an unrevealed period of time. The most powerful member of the Imperial Guard, Gladiator has performed feats such as lifting skyscrapers, staggering foes with heat vision, freezing them in place with frost breath, moving in space at hyper-speed and surviving supernovas. He has been described as capable of ripping planets from their orbits, and collapsing "the heart of stars" with his bare hands. Reed Richards originally theorized that Gladiator's powers were in part psionic,and this has been confirmed in his later appearances. It has also been discovered that Gladiator is vulnerable to some forms of radiation and a telepathic suggestion that causes him to doubt his powers will also weaken him considerably.
Above; left: Gladiator statue by Hard Hero (under license from Marvel) and illustration by Rob Liefeld.
Posted by Chuck Wells at 11:40 AM

Man, the Claremont / Cockrum era of the X-Men was the best (and largely due to the "we'd rather be working on Legion of Super Heroes" vibe)

Recently played Marvel Ultimate Alliance with my son on the PS2 and when our team stepped into a room on a Shi-Ar starship and saw gladiator waiting for us all I could say is "Oh hell, we're dead." lol