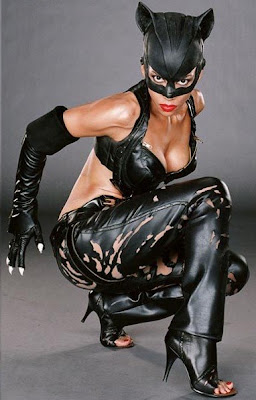 Halle Berry truly earned a Razzie Award for her turn as something-that-tried-to-pass-itself-off-as-Catwoman; but she failed miserably to achieve that goal.
After assaying the iconic role of Storm in the X-Men films, also to mixed results, the Oscar winning actress seemed more than desperate to channel the Eartha Kitt, version of Catwoman from the campy old Batman television. Apparently nobody thought to clue poor Halle in that the late Ms. Kitt wasn't the best actress to tackle the famed Gotham City vixen. Julie Newmar still owns the role!
Adding insult to injury, Batman doesn't even appear in the film, and I don't recall whether he is even mentioned. I guess I was laughing too hard the only time that I managed to watch this turkey.
Speaking of vixens, the real sad thing about this dumb movie, is that DC Comics had a similar African-American character named "Vixen" who could have served as a nice model for this film, of course then the producers wouldn't have been able to trade on a better known heroic name, but maybe now they are wishing that they had thought outside the "litter" box.
Posted by Chuck Wells at 12:26 PM

She looks great in that suit though! In fact this whole film should be edited to her slinking around in the suit with no sound. Perfectly watchable then. ;-)