From the Dust Bin: The Inferior 5 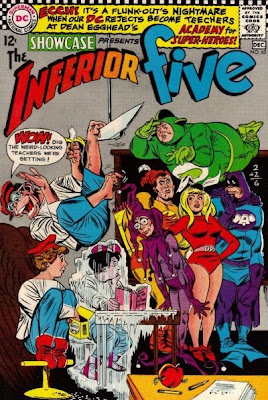 The Inferior Five (or I5) was a DC Comics series that originally premiered in Showcase #62 (1966). It was created by E. Nelson Bridwell, Joe Orlando and Mike Esposito, the group was intended as a parody of all the superhero teams whose members had such great powers that they could have solved any of the crimes put before them singlehandedly, but the I5 had to work together since none of them could have effectively fought crime on their own.
The premise was that the characters were sons or daughters of members of a superhero team called the Freedom Brigade (a parody of the Justice League of America) and most of the I5 were takeoffs of other popular DC characters, although Merryman's appearance was specifically modeled on comedian Woody Allen.
After appearing in Showcase #62, 63, and 65 (1966), they received their own book which lasted twelve issues. The first ten featured all-new material published between 1967 and 1968. In one memorable adventure, they met a group of superheroes who looked deceptively similar to certain Marvel Comics superheroes, but slightly changed to avoid copyright problems, and the I5 fought alongside them to repel an invasion of aliens with hypnotic eyes (and garlic breath). Yuck!
Issues #11 and 12 were published in 1972, and were all reprints, except for new covers. Thereafter they have only appeared sporadically, most notably in Showcase #100, one or two panels in Crisis on Infinite Earths, The Oz-Wonderland War #3 (March 1986), in a superhero Limbo in Animal Man.
The Inferior Five were comprised of: Merryman, the son of The Patriot and Lady Liberty. He is a weakling in a jester outfit and the chosen leader of the group. Awkwardman, son of Mr. Might and the Mermaid. He is super-strong and able to live underwater, but is also very clumsy. The Blimp, the overweight son of Captain Swift, who could fly like his father but, as he lacked his father's speed powers, could only fly at super slow speeds — with a tail wind. White Feather, son of The Bowman. He was a superb archer when he didn't think anyone was watching; people made him nervous (as did just about everything else) and Dumb Bunny, the stupid but super-strong daughter of Princess Power.
Posted by Chuck Wells at 1:23 PM