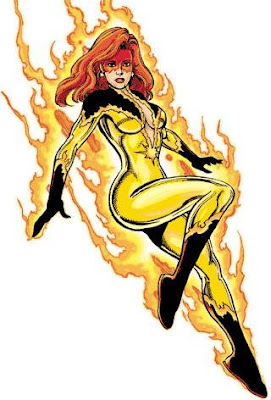 Firestar was originally created for the animated series Spider-Man and His Amazing Friends. The creators had originally wanted to use the Human Torch, but the rights to the character were tied up. Kathy Garver provided her voice. Neither the animated series or a subsequent one-shot Spider-Man and His Amazing Friends comic book (which Marvel adapted from an episode for print) are considered part of standard Marvel continuity.
Firestar (Angelica "Angel" Jones) is a mutant with the ability to generate and manipulate microwave radiation, which allows her to generate intense heat and flames and to fly. Firestar essentially harnesses ambient microwave radiation from her environment, making her powers far stronger in an environment such as space, where the concentration of microwaves is much greater than within a planetary atmosphere. In the comics version, she has been a member of the Hellions, the New Warriors, and the Avengers.
Firestar was one of the few mutants left on the planet with her powers intact, after the Scarlet Witch altered reality and decimated the mutant population, nor was Firestar among the New Warriors who died in the catastrophe that sparked the events of Civil War.
Illustration by George Perez.
Posted by Chuck Wells at 4:08 PM

Firestar was a great character. I loved her in the Spidey cartoon and her coic mini series in the 80s as well.