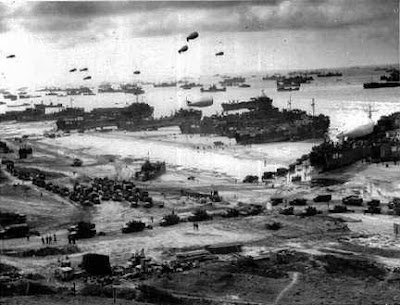 On June 6, 1944, the "D-Day" invasion of Europe took place during World War II as Allied forces stormed the beaches of Normandy, France.

There were 156,000 Allied troops involved in the assault and 73,000 of those were American. There were 80,000 German defenders arrayed against them. 12,000 Allied fighting ships, 804 transport craft and 4,125 landing vehicles ferried those young men into battle or touched down on those beaches (or tried to). 10,000 Allied aircraft dropped supplies or combat paratroopers into withering enemy fire.

In the end, 9,758 Allied soldiers, sailors and air corpsmen lost their lives on that day. 6,603 of them were Americans.

Thanks to that greatest generation of Americans and our staunch allies, Nazi Germany and the other Axis powers were ultimately defeated.

It is in humble recognition of the sacrifices that our grandmothers and grandfathers from that era experienced, that the Catacombs humbly expresses our deepest thanks.

It is also worth mentioning in a comic book-oriented blog, that the golden age publishers, writers and artists of our favorite heroes took note of the unprecedented historical events of those years and had the fictional mystery men participate by calling for readers to buy war bonds, or ration certain products. Hell, within the pages (or on the covers) of those now rare comics, the heroes even slugged it out right along side the servicemen. Many of those creators also enlisted or were drafted into the military.

It may seem passé these days for modern audiences, but back then even Batman & Robin took up machine guns against the enemy, Superman & Captain Marvel hopped astride bombs or rockets that were earmarked for Tojo & company. Captain America himself socked it to "Uncle" Adolf Hitler on his first issue cover. Millions of comic books were carried into Europe folded into the duffle bags and back pockets of thousands upon thousands of young men, as cheap entertainment for the long months and years ahead.

It is difficult to separate the comics themselves from that era, because so many of them reflected the times. In our politically correct current climate, even the stereotypical portrayals of certain racial groups often prove problematical to cite, but WWII made its mark not only on the world, but in the comic books and comic strips of that age.
Posted by Chuck Wells at 1:08 PM

Excellent post. As a veteran myself and the grandson of an Army soldier who proudly fought during WW2 its important to know that our newer generations do not forget the importance of such days as this.

I'm an Air Force veteran myself, Wayne and I had a grandfather in the Navy back then, plus several great uncles who served in various branches of the military during WWII.