From the Dust Bin: Judy of the Jungle 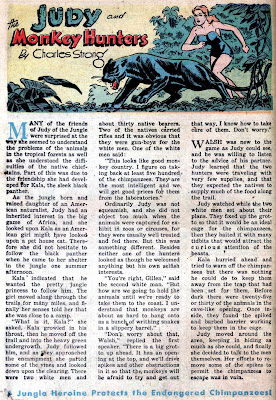 Judy of the Jungle appeared for about two years (between 1947-1949) during the golden age as a feature in Exciting Comics (published by Nedor) where she soon replaced the Black Terror as the lead cover feature. Judy was one of a long line of jungle girls who cavorted throughout Africa encountering all manner of wild beasts and native threats.
Her stories ran in issues #55-69 of Exciting Comics. A cowboy character "booted" her off of the covers for the last couple of issues of her run.
This page is the first part of one of those text pages that comics used to run in order to satisfy postal requirements for magazine rates.
Posted by Chuck Wells at 10:22 PM