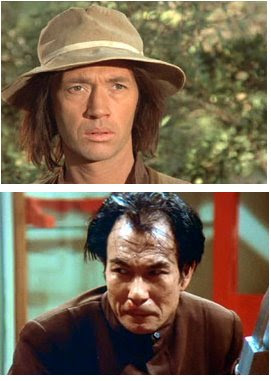 Genre fans lost two iconic martial arts superstars over the last couple of Days. David Carradine, who came from a family line of actors, and who parlayed his name into dozens of roles over the past several decades in western, sci-fi, horror and action films, has passed away in unusual circumstances in Bangkok. Carradine achieved his greatest fame on the 1970's television series, Kung Fu as Kwai Chang Caine - a Shaolin priest wandering the American West.
Shek Kin has also passed away, and I am unclear of the actual spelling of his name here, but he appeared in dozens of martial arts films before he became immortalized as the nefarious druglord Mr. Han, opposite John Saxon and the great Bruce Lee in the classic martial arts film, Enter the Dragon.
To the families, friends and fans of these two terrific performers, the Catacombs sends many condolences.
Posted by Chuck Wells at 1:10 PM

There are at least two major systems (and many minor systems) for the transcription of Chinese characters into a Latin alphabet. Additionally, the Chinese tend to present family name first in their own country, but the ordering of their names is handled inconsistently in the West.