True Blood (2nd Season Premiere): "Nothing but the Blood" 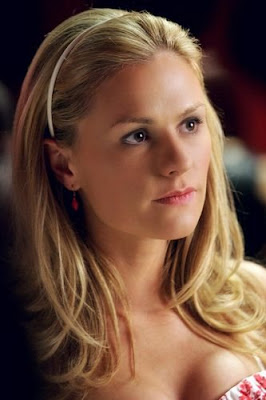 The second season of True Blood premiered on HBO last night, and while I didn’t follow the show beyond a casual glimpse last season, after hearing that star Anna Paquin (who played Rogue in the X-Men film trilogy) was going to get quite naked in the episode – I just couldn’t resist.
She did, and it was well worth my time. Yummy! It has also been widely reported that Ms. Paquin has become romantically involved in "real" life with her costar Stephen Moyer, and I appreciate the chemistry that the two have onscreen. After drooling over young Anna’s "goodies", I definitely envy the guy for all of the non-vampiric noshing that he must be enjoying off camera.
True Blood may not be for everyone’s tastes, but if you don’t mind a little graphic violence, sexuality and mature themes, give it a try. Of course, there are also redneck vampires, shapeshifting dogboys, black magic women, etc. Maybe we’ll get to see even more of Anna Paquin/"Sookie" Stackhouse’s naughty bits on subsequent episodes, and hey, they’ve also got the uber-sexy Michelle Forbes (Ro Laren on Star Trek: The Next Generation and Admiral Cain on Battlestar: Galactica) on the show too. I really wouldn’t mind seeing her doff her duds for the camera once in a while.
Although I've never read any of the Charlaine Harris novels upon which this series is based, if they ever need to cast a king of the Dixie vampires, I think Christopher Walken would fit right in with this crowd.
Posted by Chuck Wells at 11:49 AM