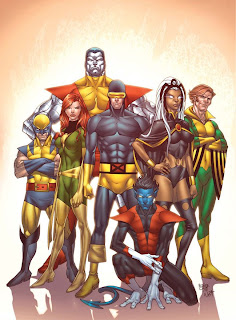 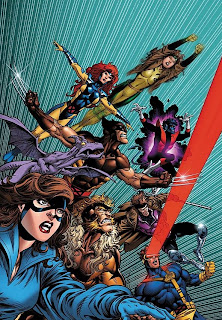 I haven't been able to buy any of the X-Men books in so long that it is with great trepidation that I find myself finally picking one up, and even anticipating another.
Veteran writer Chris Claremont, who originally penned the popular teams adventures for 16 years, recently returned as scribe for the merry mutants with June's X-Men Forever #1. Claremont was a guest at this years Heroes Convention, and I happened to be in line while he was verbally jousting (in a nice way) with fans over what happened to Wolverine in the new series first issue, and the relative merits of replacing the adamantium-laced mutant in the X-Men with the villainous Sabretooth. As Mr. Claremont put it, following little effective repartee from the folks gathered in his long line, "Wouldn't you rather read something that you haven't seen before, than just another rehash of the same old thing?" Well, we'll see, Chris!
One other big draw for X-Men Forever is the artwork of Tom Grummett, which gives the book a solid penciller with proven storytelling skills & a pleasant style that appeals to fans of classic Marvel imagery.
July hopefully brings another "X" book with promise, Uncanny X-Men: First Class #1, written by Scott Gray with art by Roger Cruz. This one is supposed to cover the early days of the X-Men’s "Second Genesis" group of Cyclops, Storm, Banshee, Colossus, Nightcrawler, Wolverine and Phoenix; all sporting their classic, original (and sorely missed) superhero costumes!
Each of these comics appeals to ye Catacombs editor because of certain classic elements (like the spandex super suits) which hearken back to the days when comic book professionals weren't embarrassed to be writing superheroes-who looked like superheroes, so if you're like me, keep your fingers crossed and give these books a shot.
Posted by Chuck Wells at 1:03 PM

I am a big fan of comic books. I have an entire collection, and I’m thinking of starting my own comic book. It’s a great way to express yourself.