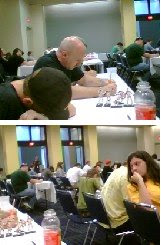 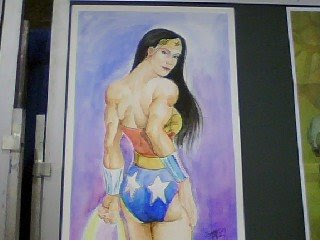 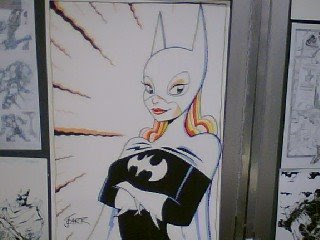 Overall, this years Heroes Convention was just as fun, exciting & cool as usual. I picked up the entire run of the original Guardians of the Galaxy series in Marvel Presents and three issues of Ms. Marvel, all from the 1970's - in high grade for cheap (in fact, I believe these books were warehouse copies, since they appear never to have been read). I got them for $2.50 apiece. I also picked up a small stack of other late 70's and early 80's books to plug holes in my collection, for about a buck each.
I scored a few commissions from David Wachter (Scar Tissue, Guns of Shadow Valley), Stephanie Gladden (Cartoon Network Block Party), Joe Staton (Scooby Doo, E-Man) and Guy Davis (BPRD, Nevermen). Arranged a few interviews which will be upcoming in the Catacombs (tease).
Stood in lines from hell to get stuff signed by Ed Brubaker, Chris Claremont and Bill Sienkiewicz and spent most of Sunday tracking down all of the eclectic guests who contributed art pieces to the convention program book, so that I could get their autographs. Managed to locate all but three, and they had apparently left early.
I really appreciate those shows where the organizers establish limits on autographed items. Both Claremont and Brubaker showed up long after the con got underway each day of the show, and each time dozens of fans had been patiently waiting for at least a few hours to see these guys AND then these gentlemen blithely signed "everything" that a limited handful of folks brought. I do NOT at all care for the occasional fan who brings a stack of 50 to 100 comics (or more?) to be signed. Let's face it, nobody is that big of a fan and most of those signed items will be going up for sale on eBay. I see no reason to help them out to that extent, particularly when its hot and many other people are patiently waiting. Brubaker seemed particularly oblivious to how long people were waiting. On Friday he had people waiting for 3 to 4 hours as he signed books for TWO people. Each had a stack of no less than 100+ items. Claremont struck me as the kind of guy who likes to hold court, waxing on and off about this subject and that subject to amuse his audience. We weren't amused! I don't mind a pro taking a rest here and there, its hard on the hands signing so many things. I understand that a guy will need to eat, go to the bathroom and visit with old acquaintances, but when people are sweating to death and fading right before your very eyes, shut the hell up and sign stuff, buddy. He at least, apologized for the delays every so often, but he too, signed mile high stacks of comics & books without end for a few miscreants.
Brian Michael Bendis, Matt Fraction and Jeff Smith had lines that were equally as long - or longer than the two mentioned above - but they went above and beyond the call to get their fans through the lines quickly. Bendis even brought cookies to pass out to those people who were waiting. It makes standing in line so much more tolerable, when the guest is mindful of the crowd. Bravo, gentlemen! You each earned my respect.
Some of the photos that I snapped with my cell phone fouled up, the two up top are from the Sunday quick draw contest. One sheet of paper, a pencil and twenty minutes and a chance to win a nice prize. My 10 year old nephew earned third place on the final day of the show in his age division. Congratulations Jackson, you did a good job!
As a consolation for the messed up photos, here are two more snaps from Saturdays art auction (I don't know the artists names, sorry). The Heroes Convention has a history of helping out charities ranging from the local burned children's fund, to assisting comic creators on hard times like the late Sam Grainger, but since most of the major publishers scaled back from underwriting costs of the show, the auction helps earn money to cover the costs of bringing each years massive slate of guests to Charlotte. All of these endeavors are worthy causes and everybody has a great time too.
That's it for this year, hope you all can join us next summer.
Posted by Chuck Wells at 10:03 AM