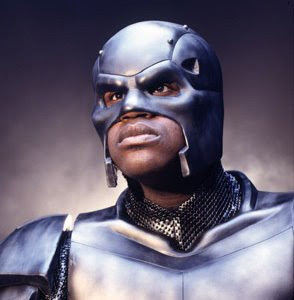 Steel was a 1997 film starring basketball legend Shaquille O'Neal and future X-Files star Annabeth Gish. It was based on the DC Comics character John Henry Irons, but the film was considered a huge flop both critically and financially when it was released. Steel was produced for an estimated $16 million, but barely grossed $1 million in the U.S., including a mere $900,000 in its opening weekend.
The film was intended to be a spin-off from a new Superman film that used the Death of Superman storyline (which originally introduced the character in the comics). However the project languished in development hell for so long that the spin-off moved forward without the film it was to be attached to and due to an insufficient budget, most of the props (especially Steel's suit) were taken from the Los Angeles junkyard.
Posted by Chuck Wells at 2:31 PM