How NOT to do a Superhero Movie: Justice League of America (1997) 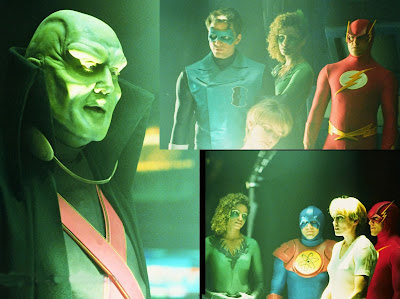 Back in the mid-to-late 1980's, writers Keith Giffen and J.M. DeMatteis headed up a popular Justice League comic book series for DC that was rebooted after the Crisis on Infinite Earths.
In 1997, the CBS television network ordered a pilot for a proposed weekly series, based upon the JLA from the Giffen/DeMatteis era. Justice League of America centered on a female meteorologist who gained superpowers and her subsequent induction into the Justice League, while the city of New Metro is held to ransom by a terrorist armed with a "weather control device." Justice League of America never aired in the United States (although it was shown in a few non-US markets). A bootlegged version of the film can usually be found at comic book conventions.
Reviews of the film have been mixed at best, with common complaints of serious plot holes, poor special effects, bad costuming and that the league members deviated heavily from their established source characters. The kindest criticisms have compared the movie to, "Friends" with superpowers!
Comic book writer Mark Waid has described it this way, "80 minutes of my life I'll never get back."
The cast included David Ogden Stiers (Mash) as the Martian Manhunter, John Kassir (Tales From the Crypt) as the Atom, Miguel Ferrer as the villain Dr. Eno/Weatherman and David Krumholtz (Numbers) in a supporting role. Other DC heroes who were featured included, Fire & Ice, Green Lantern and the Flash, but those roles were filled by largely unknown actors (who have thankfully remained that way).
Posted by Chuck Wells at 1:49 PM

I've seen this. (unfortunately) Its really bad. ...and thats putting it mildly.