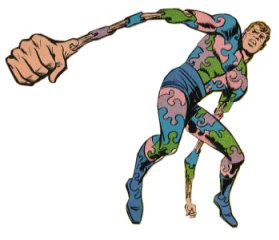 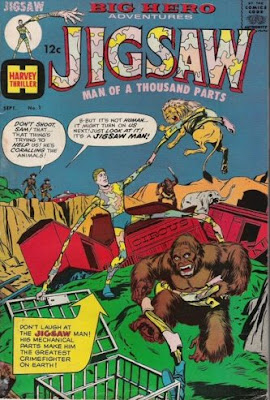 Jigsaw was created by Joe Simon for Harvey Comics short-lived superhero line, Harvey Thriller, but the disconnectable "Man of a Thousand Parts" only survived for two issues published between September and December 1966.
The feature was drawn by Tony Tallarico, with the writing credited to Otto Binder. The series had several backup features like "Super Luck" in issue #1 and "The Man From SRAM" (art by Golden Age veteran Carl Pfeufer) in #2. The first issue also featured a science fiction story drawn by EC Comics great Reed Crandall. It has been speculated that some work for a third issue may have existed when the line was cancelled.
Posted by Chuck Wells at 7:22 AM

Ohhhh this is just too good. further proof that a certain hack and back-stabbing liar I know couldn't come up with a totally original idea if he tried. same tagline even... too funny. This cover will be making its way through a few mailing lists for sure!

Sorry Chuck, bit of a personal rant there against someone in the comics/pulp world who has stepped on a LOT of toes the past couple of years :-)

Harvey did have some excellent super heroes during the golden age though!

I wouldn't mind hearing the story behind that, Wayne. Email me if you can fill me in.

Glad to tell it. I'm not sure I have your correct email though. shoot it to me at shaolin770@yahoo.com