On the Tube: Virtuality 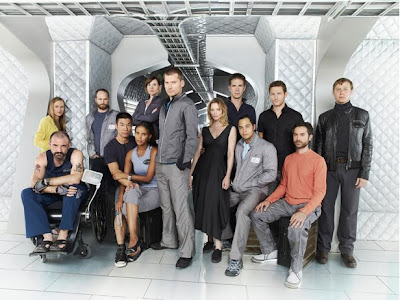 If you blinked you probably missed Virtuality last night, but this potential series pilot from executive producer Ronald D. Moore (Battlestar: Galactica) and director Peter Berg (Friday Night Lights, Hancock) aired with stellar reviews from multiple sources and ye Catacombs editor heartily agrees. With Galactica gone and Lost returning in January for its final season, genre fans need all the quality shows that we can get (and we've seen how crappy Heroes has become).

Aboard Earth’s first starship, the Phaeton, a crew of 12 astronauts is on the verge of embarking on an epic 10-year journey crucial to the survival of life on Earth. They have reached the “go” or “no go” point, the critical part of the journey where the crew must commit to traveling to a distant solar system millions of miles away. If they “go,” they cannot turn back.

In order to help the crew endure the long mission, a system of virtual reality modules is installed aboard the starship. These modules allow the crew to assume various identities and enjoy a variety of adventures, until a flaw is discovered in the system.
Each crew member can assume adventurous, avatar-like identities as they explore self-created worlds and scenarios, or simply spend quality down time as themselves in the ultra-life-like simulators. From a war hero to a rock star to secret lovers on an island, these are their psychological lifelines, and each module’s unique setting was chosen by the crew member before departing Earth.
But there is a “bug” in the system.
As crew members go in and out of reality, they realize that a virus has entered their private world. Questions are raised, and suspicions fanned: Is someone on the crew responsible? When the interloper’s intrusions cross a violent and disturbing line, the ship’s commander makes a difficult decision to shut down the modules. But before he can, a tragic event threatens the mission. Is it an accident or a crime? Real or virtual? Whatever the case, it’s too late to turn back, so the group ventures forth into space, fearing that they may be harboring a person or presence determined to derail their vital mission. Meanwhile, tensions are heightened even further as surveillance cameras capture their every move for a reality series back on Earth.
Awesome!
Hopefully the positive word of mouth will help send this thought-provoking show to series, but if not, seek out a copy of it in any way shape or form that it can be found. Its that good!
Posted by Chuck Wells at 9:30 AM