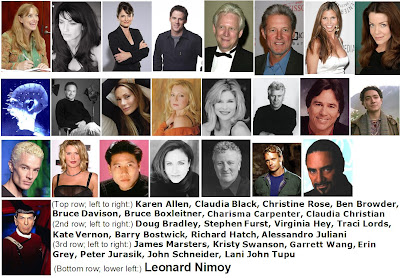 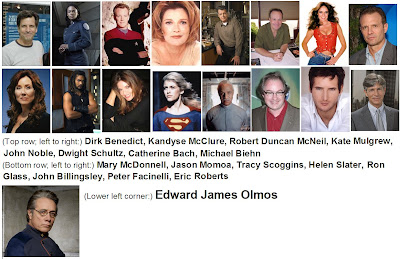 Dragon*Con is the largest multi-media, popular culture convention focusing on science fiction and fantasy, gaming, comics, literature, art, music, and film in the US. Dragon*Con 2009 will be held on Labor Day weekend (September 4 - September 7, 2009) in Atlanta, GA.
Since May has about run its course, and to allow all of you geeks an advance "heads up" on which celebrities are currently planning on making the trek down South, take a gander at this assemblage of genre veterans representing such classic, popular TV series & films as: Star Trek, Babylon 5, Battlestar: Galactica, Smallville, Supergirl, The Dukes of Hazzard, Farscape, Twilight, The Rocky Horror Picture Show, Raiders of the Lost Ark, Starman, Pitch Black, Heroes, X-Men, Buffy the Vampire Slayer, Angel, Stargate, Hellraiser, The Road Warrior, Buck Rogers, The A-Team, Blade Runner, Fringe, The Terminator, Firefly/Serenity and many, many others.
There will also be a top assortment of science fiction, fantasy, and horror authors, comic book writers and artists, painters, model makers, animators, and so many costumers that you might believe you've fallen into the Twilight Zone .... and more goodies than you will have time to take in.
Come on down to Dixie and join in the fun, and again, you have all summer long to plan your trip (& set aside sufficient funds to cover the tab).
PS: There seems to be quite a bit of female pulchritude up there that I haven't used as "Gal" Friday subjects, so maybe my self-imposed moratorium won't last too long after all. Yummy!
Posted by Chuck Wells at 10:40 AM

Living about 20 miles north of Atlanta I took my son there in about 1998 and really enjoyed meeting the artists and collaborators such as Denis Kitchen.

Being middle-age then I didn't quiet know what to think about the people in costume. I kept asking myself "why?" Oh well, everybody has their own drummer