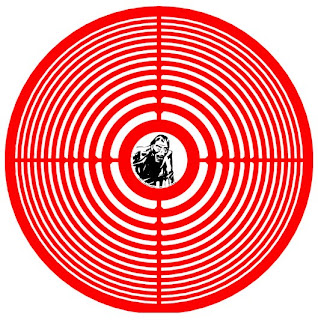 So, I received a message from the fine folks at Blogger the other day advising me that I hadn't been playing fair in regards to the rules of the game. It seems that they had been contacted by the legal representatives of a fetching young lass that had been profiled on one of my weekly "Gal" Friday! features.
This bodacious young lass (or at least her legal eagles) wasn't pleased that I had posted photos of her on ye olde Catacombs blog. So, I was summarily singled out via threatening language to cease and desist. Like all good zombie drones, I have complied. Both posts which featured the curvaceous gal have already been deleted, never to be seen here in my dusty realm again. I am mulling over the likelyhood of deleting all of the "Gals", but the tears will have to stop flowing before I can bring myself to actually follow through with that sad action.
I haven't decided yet if I am pissed about this or just irritated. There are no charged fees to peruse the editorial ramblings here and besides, her sweet ass appears in many other domain locations and is easily acquired within mere seconds online with a simple image search.
A common phenomenon in the comic book industry is the doctrine of "fair use" which allows artists, both famed and otherwise, to produce convention sketches, commissions and other drawings of famous characters that are in actuality owned, trademarked and copyrighted by some corporate entity or other. You see, it's all about promotion. Unlike these rank and file illustrators who get to charge for their services, in my opinion, when I've posted photos for "Gal" Friday or on any other occasion, it was in the interests of turning my fellow genre fans onto some hottie - often with at least a tertiary connection to the world of comics - helping to promote these ladies too, in a similar manner to which they were already hawking their own "goodies".
Maybe, I'm just wrong in my stance, but the Blogger message left a bad taste in my mouth, so I've decided to kill the "Gal" Friday featurette - for the time being.
It may bounce back again down the road, in another form or whatever else strikes my fancy, but it occurs to me that I may want to read through the blogosphere requirements before proceeding with anything similar. Cindy Lauper taught us all that "girls just wanna have fun", but that was way back in the 1980's and apparently some latter day estrogen harpies do not feel the same way.
If you need a quick fix, check out yesterday's Phantom Lady piece. It's lines on paper (or up on screen), but "cheesecake" goes down the same way.
No matter how ya' slice it!
Posted by Chuck Wells at 12:10 PM

That sucks, I enjoyed your Gal Friday posts. Its been a fear of mine to push too far with what I post on my Wednesday "Hump day" over at the Crypt. Can you say who the girl in question was?

That's too bad - I hate when my stuff gets pulled off the net. Another vote for more Gal Friday, please.

What?! I like the Gal Friday posts...I hope that this doesn't deter you from continuing....maybe with just comic book gals. I liked the Phantom Lady post.

I'm sorry that happened to you. I think most of bloggers us do a balancing act of the Fair Use Doctrine - or walk a thin line all the most of the time... especially one like yours who needs the certain illustration to prove their point.
Well, at least you were noticed.

I appreciate your comments guys, and my "Gal" Friday featurette may just require a bit of tweaking before it can return. The Phantom Lady post that I made on the previous day was sort of a test run to see if I could be satisfied with something other than a "real" photo of an "actual" chick.

It might work, but I could see how it might be "limiting" in its execution. We'll see!

(Wayne, if you really wanna know who she was, email me privately and I will share that info.)

bummer. I'd understand it if someone like me got a Cease & Desist ( I post comics ), but a few pictures of a pretty girl? & ones that are fairly common on the 'net, at that? what're you gonna do? you just got to go along with it, haven't you? shame, though.