Behind the Mask (or not)? 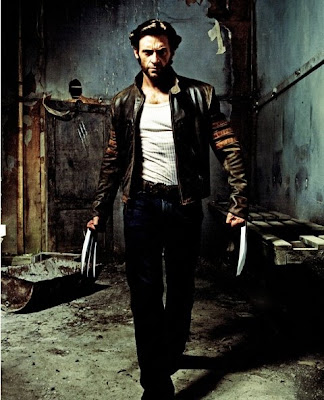 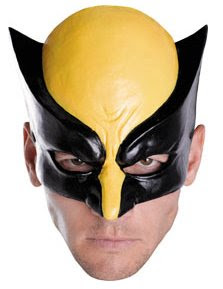 X-Men Origins: Wolverine hit the top spot at the US Box Office over the weekend, grossing $87 million to make it this year's biggest movie debut so far. So let's tally this whole movie thing up a bit: X-Men in 2000, X2: X-Men United in 2003, X-Men: The Last Stand in 2006 and now, X-Men Origins: Wolverine = millions upon millions of dollars and we have yet to see Logan (aka Wolverine) wearing his classic mask.
What is up with that?
Can you imagine for one minute, seeing any Batman film without Bruce Wayne having to put the cowl on....at least once? Um, hell no!
Once. Not even once, has Hugh Jackman checked his ego (or even more likely, "Hollywood-leading-man" attitude) at the door and put the mask on. Yeah, I can just see all of you poozers already gearing up to trash me for pointing this little fact out, but come on, don't any of you want to see the Jackman in the blue & yellow costume, with the mask...at least once.
Speak up people, send those emails and let's see Wolverine looking like the superhero mutant really ought to look onscreen next time. (I mean they've adequately gotten the non-masked look down pat already, but now it's just getting boring).
Posted by Chuck Wells at 4:09 PM

Where as Batman's cowl is synonymous with the character across nearly all media formats some of the more popular "versions" of Wolverine have been without it [Age of Apocalypse].

Besides, its kinda dumb...

That's a weak argument, Caine old buddy. Logan has been depicted as Logan (and Wolverine) quite often sans mask), but if I was to bet real money on it, I would have to go with his having appeared far more often in costume. With the mask!

If blue & yellow doesn't suit you, there is always the later brown & orange version.

While I like my costumed heroes..."costumed" I will admit to thinking they hit upon the lack of them in the first X-Men movie with a fairly clever line:
"What would you prefer, yellow spandex?"
Some costumes really just don't translate well to real life (For example the Phantom damn well better be tough if hes wearing purple in the jungle!) But it might be nice to see them try to make a workable version of the familiar costume(s).

I will say, the lack of Wolvie being in costume doesn't bother me too much. Deadpool needed some kind of mask though.

I do NOT however think the lack of a mask has anything at all to do with Hugh Jackman having an inflated ego. Every interview I've seen of him he seems a fairly humble guy actually.

Hugh does seem fairly down to Earth and humble in interviews and such, but then the man is an actor after all and I take those things with a grain of salt.

That IS why I amended my post with the "Hollywood-leading man" attitude thing, but to give Mr. Jackman the benefit of the doubt, maybe his agent insists that his lovely facial features not be obscured by any silly old mask.

I'm gonna vote against the mask also. I thought it was silly in the comics and it would not translate to real life very well at all.

But Wayne, I do think Billy Zane looked pretty good in the Phantom's purple. That's one of my favorite comic book based films.

actually, you know what else I'd like? a decent Wolverine movie would've been cool.

I think that Wolverine could make it even better without the idiot "I'm-Wolverine-just-like-in-the-comics" hairdo. There are some people's hairs that look pretty much as what would be a realistic, not cosplay-y, Wolverine's hair, they should have imitated that (just google for the classic picture of Che Guevara, for instance).

They should have also make some sort of camera tricks and CG to make he look like a short man, if they really have to have a 6 foot actor. These are two things that annoy me much more than the costume.

And if it had to be a costume, it would better be some of the versions without he whiskers. I'd like some version of the brown-beige one, but with some tweaks to not look like something that no one would wear, ever.