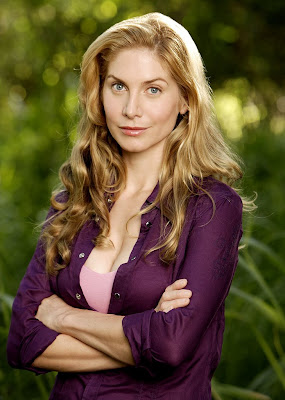 Lost has finished its superb fifth season by leaving the fates of many of the series regulars up in the air, par for the course for this top-rated and beguiling genre-bending television show.
In as large a cast as Lost has juggled it is particularly hard for any given actor to stand out, and it proves to be even tougher when most of the cast brings their "A" game on a weekly basis. Lost also has been fortunate to feature a strong assortment of female actors since its onset. I would have to say that it has been both entertaining and frustrating seeing what Ms. Mitchell's "Juliet" has gone through in the latter part of this season as her characters love life was knocked for a loop, after rival Kate returned to the island to - in her opinion - throw a monkey wrench into her relationship with bad boy, Sawyer.
Elizabeth Mitchell got the rare opportunity to likely go out on a very heroic high note, if her actions prove to have been truly fatal when Lost returns for its final season this fall. I won't spoil it for you if you Tivo'ed the finale, but needless to say poor "Juliet" pulled a nifty Charlton Heston ala Beneath the Planet of the Apes kind of denouement for her storied character (one of my favorites on the show), so here's to you Elizabeth.
What a way to go, Blondie!
Posted by Chuck Wells at 10:06 PM