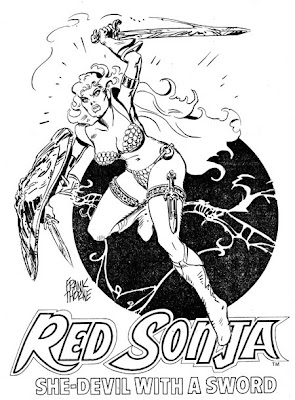 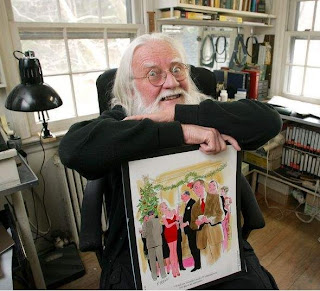 Frank Thorne began his long comic book career drawing romance stories for Standard Comics in 1948. He later drew the King Features newspaper strip, Perry Mason, and Flash Gordon, Jungle Jim and the Green Hornet for Dell Comics, but he perhaps won his most greatest accolades on Marvel Comics Red Sonja series in the 1970's.
Now 78, Thorne has spent the better part of the last thirty years producing cartoons for Playboy magazine. Few can match the cheesecake quality of Frank Thorne these days. He has also created Danger Rangerette for National Lampoon, Ghita of Alizarr — a "sexier" sci-fi-esque version of Red Sonja, and he is the author of several books, including "Drawing Sexy Women," "The Crystal Ballroom" and "Nymph."
He was recently called upon to provide sketching duties for a recent episode of the History Channel's "MonsterQuest" about the Jersey Devil. Thorne still does lots of commission work for Red Sonja, and with film director Robert Rodriguez plans to bring the character back to theaters in an upcoming movie starring Rodriquez girlfriend, Rose McGowan of "Grindhouse" fame, Thorne's legacy is assured, Hollywood has even expressed interest in bringing his character, Ghita to the big screen under her alternate name, "The Girl in the Iron Bikini."
The photo of Frank Thorne is copyrighted by Kathy Johnson of mycentraljersey.com.
Posted by Chuck Wells at 5:03 PM