Rise of the Black Lanterns! 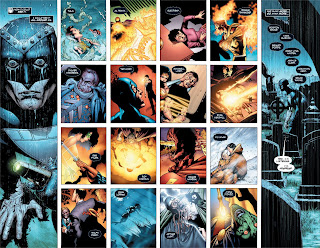 Newsarama had a post which linked to the above image, teasing certain elements of DC Comics upcoming Blackest Night mini-series event. I wish that I could say that this promo excited me, but the overall impression that I was left with after viewing it was sadness.
This brought my karma down quite a bit.
The characters that are pictured as likely "Black Lanterns" are as follows: Aquagirl, the golden age Atom, Sue Dibny, the original Firestorm, Captain Boomerang, Blue Beetle, Max Lord, Black Condor, Phantom Lady, the Human Bomb, Psycho-Pirate, the Question, the Elongated Man, Jean Loring, Doctor Light and the Martian Manhunter.
Terrific supporting characters, classic villains and big name super heroic icons who've all perished over the course of recent story lines or over the last several years. And there are even more mentioned in the far left panel, plus others spoiled elsewhere such as Aquaman.
I felt like screaming libel or slander or infamy after seeing it and I do know that lots of folks are happily anticipating this event. The artwork that is shown is topnotch, but to me these great characters are being dragged through the mud. I don't know if I will have the stomach to check this book out or not.
If I thought for one minute that this was going to be the mechanism for reviving a big chunk of them, I could get on board, but I don't think that will be the case at all.
Thankfully, there isn't too much time remaining before this Blackest Night thing all plays itself out. [I am open to spoilers if anyone has the inside track.]
Posted by Chuck Wells at 1:36 PM

Hey,
Are you interested in a link exchange whit alternativecomix.blogspot.com?
If so pls email me at planetexpres12@yahoo.com, and make sure you put your blog adress in the subject.Good Luck.I hope to hear from you soon.

This might be a good way to bring back the Dibneys, Sue was always a good character when in good hands.